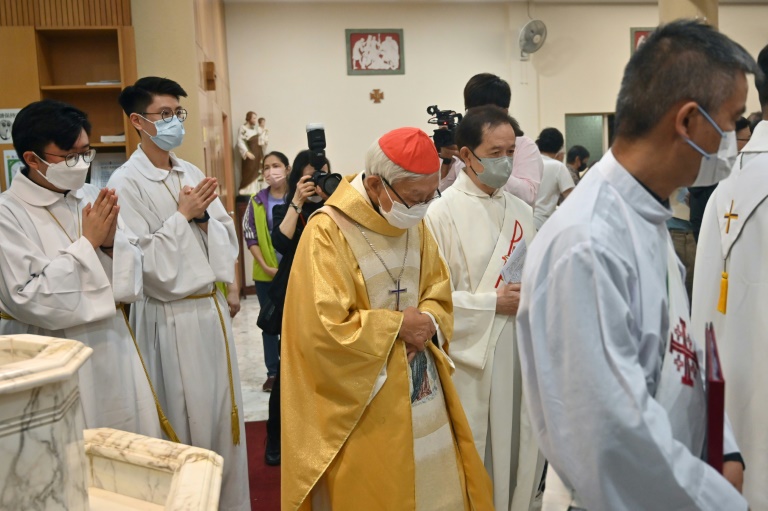 On a drizzly Tuesday night in Hong Kong, hundreds of Catholics packed into church for a mass turned into an act of resolve by its host — the retired cardinal Joseph Zen, fresh from a day in court.

The 90-year-old, who was arrested this month with other democracy advocates under the city’s national security law, pleaded not guilty earlier on Tuesday to failing to properly register a protest defence fund.

The now-defunct fund had helped pay legal and medical costs for those arrested during huge and sometimes violent democracy demonstrations three years ago.

Many who came to see Zen preach at the unobtrusive beige church on the east of Hong Kong Island were unimpressed by the authorities’ case against him.

“We of course must respect rule of law but wielding law as a weapon to oppress is by no means the goal of rule of law,” Louise, an educator, told AFP.

Philip, a health professional, disagreed with fellow churchgoers who believed Zen had brought the arrest on himself by being too outspoken.

“I cannot agree with that,” he said. “When a man is prosecuted by unjust laws, isn’t it basic human decency to pay him some respect?”

Western nations reacted with outrage to Zen’s arrest, accusing China of destroying the freedoms it had once promised Hong Kong — criticism dismissed by the city’s security minister as a “classic smearing campaign”.

“If we did not act in accordance with the law because of one’s role in the Holy See, then I think it would actually breach the Vatican’s principle of justice,” Chris Tang said in an interview with the South China Morning Post.

But when Tang’s interpretation was put to some of the churchgoers, they rejected it.

“Who is he to tell? He is not even a Catholic,” said Philip.

Dressed in gold robes and standing under a large effigy of Christ on the cross, Zen did not mention his case or the Hong Kong authorities directly.

He dedicated the mass to churches in China, where believers are split between so-called underground parishes and those officially sanctioned by the atheist Communist Party, which only allows religious institutions to function under its strict controls.

In his sermon, Zen again criticised a deal between China and the Vatican which allows Beijing to nominate bishops for the pope’s approval, calling it “unwise” despite being made with “good intention”.

“There is an urge to unify those above the ground and those underground but it seems that time is not ripe yet,” he said.

The attendees that AFP spoke to were stoic when asked if they were worried that their religion might make them targets as Beijing seeks to remould Hong Kong in its own authoritarian image.

“The Bible has taught us that a true believer will find God as he is being suppressed for his belief,” said Louise. “I am totally fine if one day they charge me of colluding with God’s Kingdom.”

“We have no idea where the government draws its red line — it can be whatever they said,” said Molly, an office clerk. “There is nothing we can do about it except for guarding our peace of mind.”

Addressing the congregation of around 300, Zen asked the worshippers to pray for “our brothers and sisters who cannot attend the mass today because they are not free”.

Zen, whose trial is set to begin September 19, alluded to difficult times ahead.

“Martyrdom is normal in our Church,” he said. “We may not have to do that but we may have to bear some pain and steel ourselves for our loyalty to our faith.”