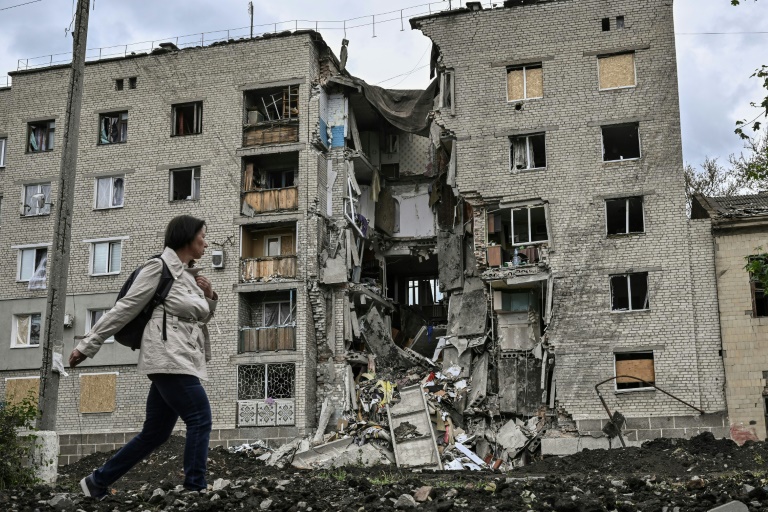 A woman walks by a destroyed apartment building in Bakhmut in the eastern Ukranian region of Donbas — the target of a major Russian offensive. – Copyright AFP/File AAMIR QURESHI

A Kyiv court is due to hand down its verdict in the first war crimes trial held over the Russian invasion.

Vadim Shishimarin, a 21-year-old Russian soldier, has admitted to shooting dead a 62-year-old unarmed civilian in the early stages of Moscow’s invasion of Ukraine.

Prosecutors have requested a life sentence.

Russia’s lead negotiator in peace talks with Ukraine, Kremlin aide Vladimir Medinsky, says Russia is willing to resume negotiations but the initiative to continue them is with Kyiv.

Russia and Ukraine have blamed each other for causing the talks to stall in recent weeks. Ukraine says it is not prepared to give up any of its territory and demanded that all Russian troops withdraw.

President Joe Biden says Russia must “pay a long-term price” for its “barbarism in Ukraine” through the sanctions imposed by the United States and allies.

If, after any future rapprochement between Russia and Ukraine, “the sanctions are not continued to be sustained in many ways, then what signal does that send to China about the cost of attempting to take Taiwan by force?” Biden asks.

Polish president Andrzej Duda, on a visit to Kyiv on Sunday, also says there can be no “business as usual” with Russia after the massacre of civilians in places such as the Kyiv suburb of Bucha and the southeastern port of Mariupol.

France’s Europe minister warns the bid by Ukraine to join the EU might not be finalised for “15 or 20 years”.

He reiterates an offer by President Macron to create a looser “European political community” that could help integrate Ukraine with the bloc sooner, a proposal Zelensky has already rejected.

Ukraine extends martial law for three months through to August 23, as the war with Russia drags on.

Ukrainian forces are under intense pressure in the eastern Donbas region and on Ukraine’s southern coast.

Shelling and missile strikes hit Kharkiv in the north, and Mykolaiv and Zaporizhzhia in the south, while eight civilians are killed on the eastern front in the Donbas.

“This is an important step on our way to energy independence,” Lithuanian Energy Minister Dainius Kreivys tells AFP.

The development comes  after Russian energy giant Gazprom halted gas supplies to Finland for refusing to pay its bill in rubles, as Moscow had demanded.

Senegalese President Macky Sall says he will travel to Russia and Ukraine soon on behalf of the African Union, whose presidency he currently holds.