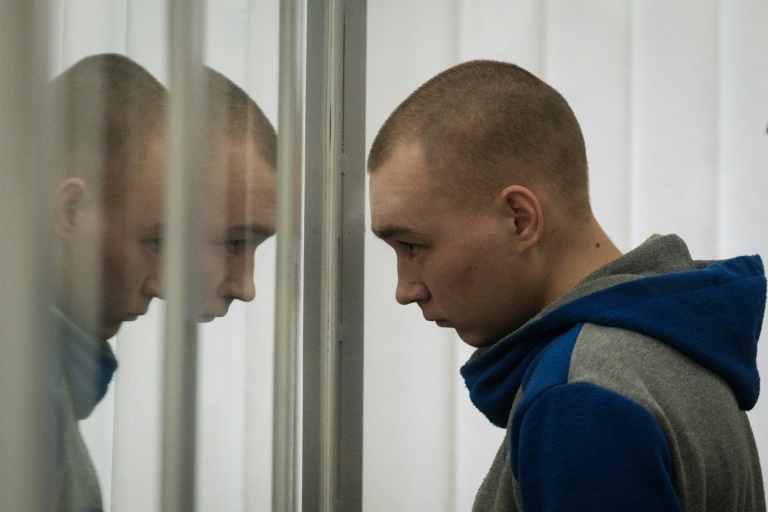 With a verdict due Monday in the conflict’s first war crimes trial, Moscow’s offensive in eastern Ukraine is only intensifying, with the city of Severodonetsk under “round-the-clock” bombardment as Russian troops attempt its encirclement.

The trial in Kyiv — seen as a public test of the Ukrainian judicial system’s independence — comes as international institutions conduct their own investigations into alleged abuses that have turned cities like Bucha and Mariupol into watchwords for destruction.

Polish President Andrzej Duda, whose country is a vital staging area for Western arms shipments and host to millions of the war’s refugees, pointed to the devastation in those cities as a reason for why “business as usual” with Russia was no longer possible.

“An honest world cannot return to business as usual while forgetting the crimes, the aggression, the fundamental rights that have been trampled on,” he told Ukraine’s parliament Sunday.

Three months after launching an invasion that failed in its initial goal of capturing Kyiv, Moscow’s forces are now squarely focused on securing and expanding their gains in the Donbas region and on Ukraine’s southern coast.

But as its relentless offensive continues, Russia’s lead negotiator said Sunday that Moscow was willing to resume negotiations with Ukraine, which it blames for “freezing” earlier talks.

Any talks, however, will not include concessions of land, according to Ukrainian President Volodymyr Zelensky’s chief of staff Andriy Yermak, who tweeted the war must end with “complete restoration of (Ukraine’s) territorial integrity”.

On Monday, Zelensky will continue his drive to rally Western support for his country’s cause, targeting the world’s political and business elite gathering in the Swiss mountain resort of Davos for the World Economic Forum.

As Ukraine’s president addresses the forum’s attendees via videoconference, a panel of judges in Kyiv will be determining the fate of Russian Sergeant Vadim Shishimarin in the conflict’s first war crimes trial.

The shaven-headed 21-year-old from Siberia has admitted to killing a 62-year-old civilian in the early stages of the invasion, but told the court he was pressured into an act for which he was “truly sorry”.

“I was nervous about what was going on. I didn’t want to kill,” he said from the glass defence box, wearing a grey and blue hoodie, as the trial concluded Friday.

Shishimarin’s lawyer has argued for an acquittal, saying his client was carrying out what he perceived to be a direct order that he initially disobeyed.

Prosecutors, who have asked for a life sentence, said he was “well aware” he was executing a “criminal order”.

Gaiday said Russia was drawing forces from a vast area — those withdrawn from the Kharkiv region, others involved in Mariupol’s siege, pro-Russian separatist militias, and even troops freshly mobilised from Siberia — and concentrating their firepower on the Donetsk and Lugansk regions.

At least seven civilians were killed and eight others wounded in Sunday’s bombardment of the Donetsk region, according to the Ukrainian army’s Facebook page.

Shelling and missile strikes also continued to pound Kharkiv in the north, as well as Mykolaiv and Zaporizhzhia in the south, Ukrainian officials said.

With the nation under relentless assault, Ukraine’s parliament on Sunday voted to extend martial law through August 23.

“There is no work, no food, no water,” said Angela Kopytsa, 52, breaking down into tears as she spoke to AFP reporters on a Russian-organised tour of captured Mariupol.

Kopytsa said her home had been destroyed during the fighting in the port and that “children at maternity wards were dying of hunger”.

Once-bustling Mariupol, which has been without electricity since early March, has now been reduced to a wasteland of charred buildings

Thousands of miles away, Monday’s meeting in Davos is expected to be dominated by the political and economic fallout from Russia’s invasion of Ukraine.

Russian business and political leaders, who once participated in debates and mingled with other A-listers at champagne parties, have been barred from this year’s gathering — dubbed “History at a Turning Point” — over the war.

Zelensky is due to confer with Davos delegates via videoconference to mark the opening of the Ukraine House Davos, a forum for Kyiv and its international backers.

And a strong Ukrainian contingent, including the foreign minister, has made the journey to plead their case.

“The major request to the whole world here is: do not stop backing Ukraine,” Ukrainian lawmaker Ivanna Klympush-Tsintsadze told reporters on the eve of the summit.

More than 50 heads of state or government will be among the 2,500 delegates, ranging from business leaders to academics and civil society figures.