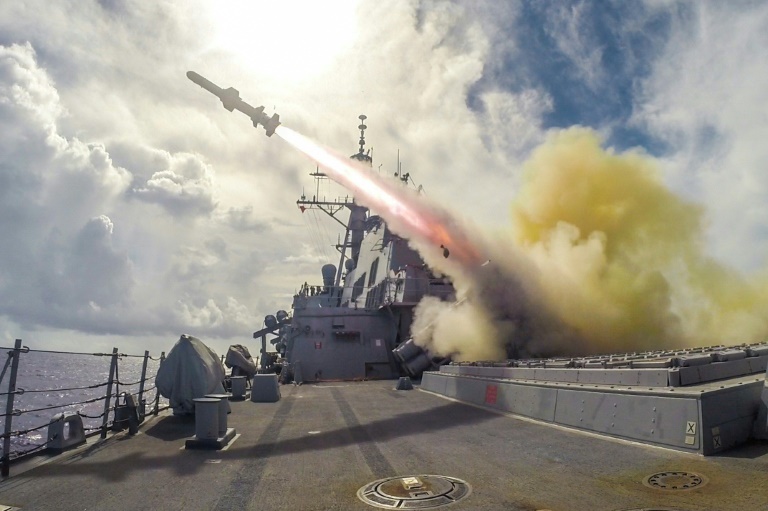 Denmark has pledged to supply Ukraine with Harpoon anti-ship missile systems, like this one seen launching from a US Navy vessel.
– Copyright AFP Ludovic MARIN

Some 20 countries offered new security assistance packages for Ukraine to battle invading Russian forces in a meeting of allies on Monday, US Secretary of Defense Lloyd Austin announced.

The group was briefed by Ukraine Defense Minister Oleksiy Reznikov on the current situation of the three-month-old war, in which the two sides are fighting along a long front line over territory Russia has seized in Ukraine’s east and south.

“Today, together with Minister Reznikov and his team, we’ve gained a sharper and shared sense of Ukraine’s priority requirements and the situation on the battlefield,” Austin said.

“Many countries are donating critically needed artillery ammunition, coastal defence systems and tanks and other armoured vehicles,” he said.

Others, he said, are offering training for Ukraine’s military.

But Austin would not provide details of what is included in a new $40 billion US assistance package for Ukraine, amid speculation that it could include high-precision, long-distance rockets that could be used to hit Russian territory.

Since the first meeting of the group at a US base in Germany four weeks ago, Austin said, “the momentum of donations and deliveries has been outstanding.”

He said Ukraine’s needs have not changed much since the previous meeting, that the war continues to be driven by artillery, supported by tanks, drones, and other equipment.

“The fight is really shaped by artillery in this phase, and we’ve seen serious exchanges of artillery fires over the last several weeks,” Austin said.

“Everyone here understands the stakes of this war and they stretch far beyond Europe.

“Russia’s aggression is an affront to the rules-based international order,” he said.

He added the Ukraine Defense Contact Group would meet next in person on June 15 during the NATO ministerial meeting in Brussels.