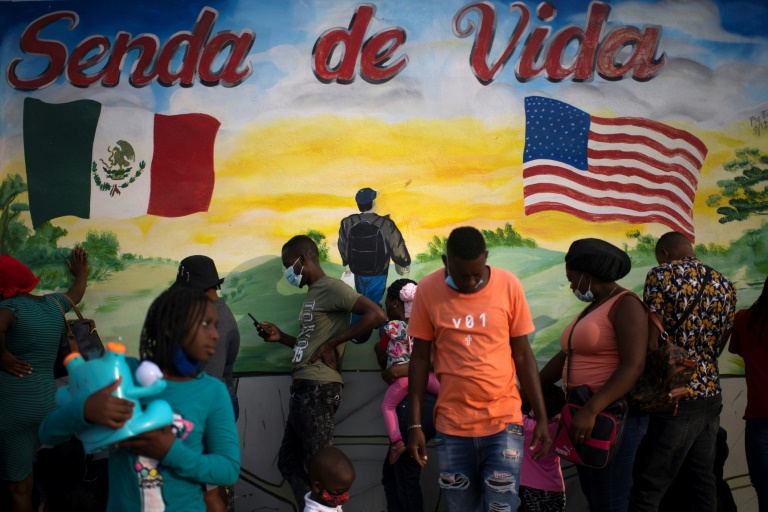 Asylum seekers in the dusty, violence-plagued Mexican border city of Reynosa were back to playing an uncertain waiting game Saturday, their dreams of entering the United States frustrated anew by a health rule imposed during the Covid-19 pandemic.

“They say they’re going to open the border today. Do you think that’s true?” asked Michelle, a 26-year-old Haitian who had come to the pedestrian bridge crossing the Rio Grande hoping for good news.

She was left disappointed, however.

A federal judge ruled Friday that the rule known as Title 42 — meant to stem the spread of Covid, it can effectively prevent anyone without a visa from entering the United States, even to claim asylum — must remain in effect.

Using social media, migrants in Reynosa have followed the legal showdown between the White House, which wants to lift the rule, and Republican governors of more than 20 states, who argue that relaxing it would spur a huge and inadequately controlled influx of migrants.

On Friday, Judge Robert Summerhays issued an injunction siding with those Republican-led states in support of the rule, first imposed under President Donald Trump.

“The Plaintiff States contend that the Termination Order will result in a surge of border crossings, and that this surge will result in an increase in illegal immigrants residing in the states,” the ruling said.

“The court finds that the plaintiff states have satisfied each of the requirements for a preliminary injunction.”

The White House said it would abide by the ruling, but that the Department of Justice would appeal.

“The authority to set public health policy nationally should rest with the Centers for Disease Control, not with a single district court,” a statement said.

Reynosa, across the border from the Texan city of McAllen, lies in one of Mexico’s most violent regions and has been shaken by turf wars between rival drug cartels in recent years.

Last year the medical aid group Doctors Without Borders (MSF) warned that migrants deported to Reynosa under Title 42 were at risk of kidnapping and violence.

Those stranded in the Mexican city face a host of additional concerns, including housing, healthcare, food and their children’s well-being.

Lifting Title 42 would have a sting in the tail. Migrants deported to Mexico under its terms can now try to enter the United States as many times as they want. But if deported to their home country, they would face another long and potentially dangerous journey back to the border.

“If they lift it (Title 42), the United States will deport more people. It’s better for us that they extend it,” said Sarah Jimenez, from the Dominican Republic, who is traveling with her Haitian husband.

“There’s a lot of uncertainty and little official information,” said Anayeli Flores, an aid worker with MSF. “People are confused.

In early May, the authorities moved nearly 2,000 of them, including women and children, out of a square in the city center where they had camped for months.

“My wife wanted to go home. Not me, because as soon as you cross the river, it’s glory — the dream of many, not just me,” said a Honduran migrant.

Pastor Hector Silva runs a shelter, but it is now out of room, and with migrants continuing to arrive, frustration levels are growing.

“You have to do your part, too,” he told a group of migrants.

“You have to go find a job, you have to find a home for your wife, to protect your child from the sun.”