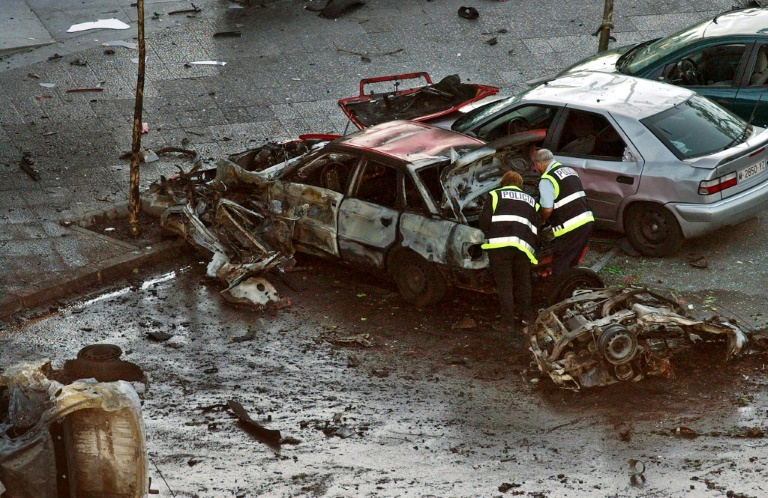 The scene of a 2002 ETA car bomb attack in Madrid; the Basque separatist group, labeled a global terrorist organization by the US, disbanded in 2018 – Copyright AFP PRAKASH MATHEMA

The US State Department on Friday removed its longstanding official “foreign terrorist organization” label from Israeli, Basque, Egyptian, Palestinian and Japanese extremist groups, but all will remain under a separate, broader terror designation.

Removed from the FTO blacklist were Kahane Chai, a Jewish extremist group linked to late rabbi Meir Kahane; the Palestinian jihadist group Mujahidin Shura Council in the Environs of Jerusalem; and Euskadi Ta Askatasuna, or ETA, a Basque separatist group that operated in Spain and France.

Japan’s Aum Shinrikyo cult, which launched a deadly sarin attack in Tokyo’s subway in 1995, and Gamaa Islamiya, the militant group led by the blind cleric Omar Abdel Rahman, who died in a US prison in 2017, were also dropped from the department’s official list of foreign terrorist organizations.

The FTO designation had allowed to the United States to take strong unilateral moves against a group’s members and associates, seizing assets, blocking travel to the United States, deportation, and — significantly — jailing for up to 20 years anyone found providing “material support” for them.

None of the five are seen as currently active organizations and the State Department must review FTO designations every five years to see if they remain warranted.

“Our review of these five FTO designations determined that, as defined by the INA, the five organizations are no longer engaged in terrorism or terrorist activity and do not retain the capability and intent to do so,” the department said in a statement.

The revocations “recognize the success Egypt, Israel, Japan, and Spain have had in defusing the threat of terrorism by these groups,” it said.

Kahane Chai, which grew out of Kahane’s Kach movement, was designated an FTO in 1997, three years after its supporter Baruch Goldstein massacred 29 Palestinians in the occupied West Bank city of Hebron.

The group’s founder, an advocate of expulsion of Arabs from Israel, was assassinated in New York in 1990.

ETA was blamed for killing hundreds in attacks as the group sought an independent Basque homeland over four decades. Eight years declaring after a ceasefire in 2010, it dissolved itself.

The Mujahidin Shura Council was blacklisted for its role in rocket attacks in Israel over 2010-2013.

Gamaa Islamiya group was built around Abdel Rahman, a radical Islamist and US resident who allegedly inspired the deadly 1993 bombing of New York’s World Trade Center.

He was convicted in 1995 over several bomb plots and sentenced to life in prison.

Removal of the FTO label does not drop the five groups from the US Treasury’s blacklist.

They remain designated as Specially Designated Global Terrorists (SDGT) entities, which allows the government to continue to hold seized assets and take control of others tied to the groups.