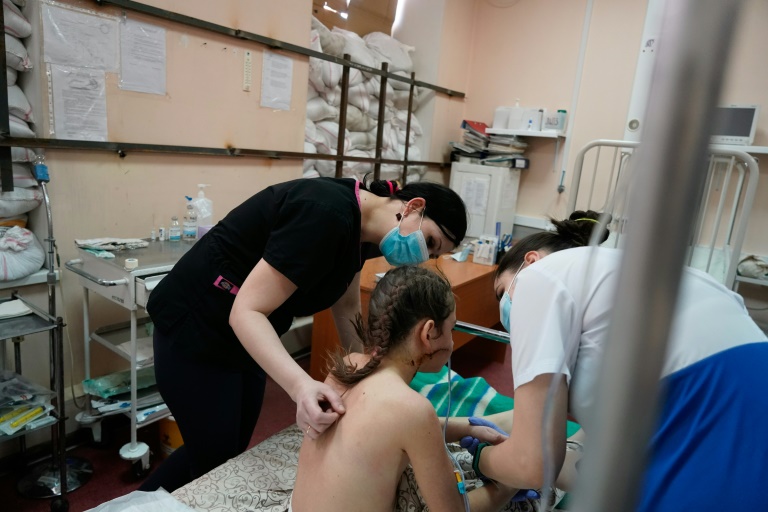 Nurses at the Zaporizhzhia Children’s Hospital
tend to Milena, a 13 year-old girl hit by a bullet as she was evacuating from Mariupol with her family – Copyright AFP Ahmad SAHEL ARMAN

It has been established, through new research, that a genetic condition causes more severe Staphylococcus aureus infections in affected individuals compared with the larger population without the condition.

The research, from UMC Utrecht, unravels why, after infection with S. aureus, some people fall severely ill, whereas others are not affected or recover quickly. One reason is linked to a genetic condition termed OTULIN haploinsufficiency. This was found through molecular level study. Not only did the research pinpoint this reason for infections, it also helped to identify therapeutic leads.

S. aureus is a Gram-positive, coccoidal bacterial pathogen. The organism has been associated with a rise in hospital infections through the prevalence of strains that are resistant to common antimicrobials, an example being methicillin-resistant S. aureus (MRSA).

A sizeable number of people carry S. aureus asymptomatically on their skin and in their nostrils. Yet for a small minority the bacterium causes life-threatening disease.

The researchers discovered, in patients with severe staphylococcal disease, an enrichment for rare heterozygous mutations in a gene named OTULIN. This gene is located on the short arm of chromosome 5 and encodes for an enzyme.

Patients carrying this genetic defect were found to carry an increased risk of suffering from episodes of life-threatening necrosis of the skin or lungs. Such diseases are typically triggered by S. aureus infections.

This disorder operates by haploinsufficiency, a genetic term to describe a situation that occurs when one copy of a gene is inactivated or deleted, and the remaining copy of the gene is not sufficient to produce adequate levels of the gene product.  Specifically, patients with a chromosomal deletion syndrome called 5p- (or Cri-du-Chat) syndrome are haploinsufficient for OTULIN.

The enhanced disease mechanism is where OTULIN haploinsufficiency causes an increased susceptibility of tissue-resident, non-white blood cells to the staphylococcal virulence factor α-toxin. This is because in most people, OTULIN governs a key mechanism of cell-intrinsic anti-staphylococcal immunity.

It is possible that the approach can also pave the way for the development of personalized anti-infectives. This is based on the discovery that naturally elicited antibodies, targeted against the staphylococcal α-toxin, can protect the patients’ cells and compensate for their inborn error of cell-intrinsic immunity.