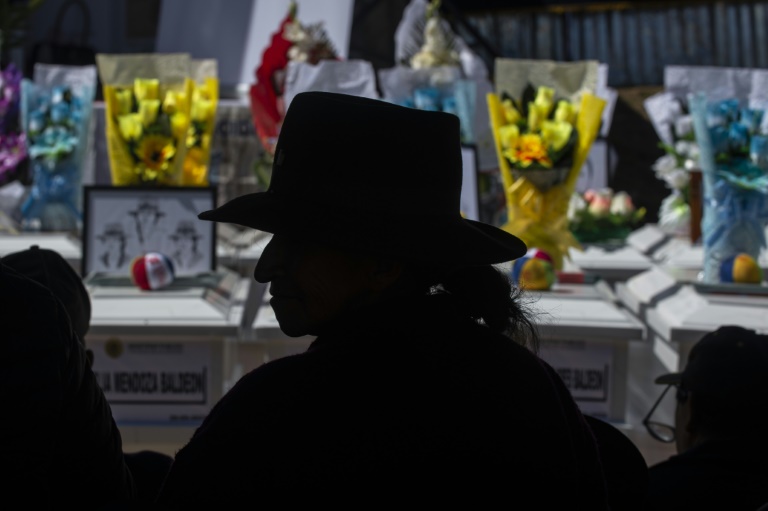 Thirty-seven years after the worst massacre in Peru’s conflict with radical leftist guerrillas, dozens of victims mowed down by the army were laid to rest on Friday.

A funeral ceremony was held in the isolated Andean village of Accomarca whose 500 inhabitants, most of whom speak only the native Quechua language, live off potato, quinoa, wheat and barley crops.

It was in this remote village at 3,400-meters altitude that on August 14, 1985, an army patrol under the command of Telmo Hurtado massacred almost the entire population, accusing them of being members of the notorious Shining Path communist guerrillas.

Some twenty children were among the dead.

“I lost my mother and my five brothers,” said mourner Teofilia Ochoa, who was 11 years old and was saved by running into the field on that fateful day.

She said people were rounded up and taken to houses that were set alight.

“Everyone was screaming, it was a terrible moment,” Ochoa told AFP, clutching a black-and-white photo of her mother.

It has taken decades to identify the remains exhumed from a mass grave years ago and returned to Accomarca on Wednesday, when they were placed into individual small white coffins, each bearing a victim’s name.

On Friday, relatives carried the coffins to the Accomarca cemetery to cries of “Justice!” and the march of an Andean band, holding flowers and photographs of their loved ones.

A traditional Andean blanket with corn kernels was placed on each adult coffin, and a rag doll on those of the children.

“On this day we honor the memory of the victims and ask forgiveness as a government,” said Prime Minister Anibal Torres, who had traveled from Lima for the funeral.

Hurtado, nicknamed “the butcher of the Andes”, is serving a 23-year prison sentence for the massacre after being extradited from the United States, where he had fled.

Of the 10 soldiers found guilty of the crime, five remain at large.

Some of the survivors, including Florian Palacios, demand redress from the state.

“We are seeing half justice,” Palacios said at the event. “We demand fair compensation from the State.”

The exact number of victims is not known, but authorities say there were at least 69, of whom 42 have been identified.

During Peru’s 1980-2000 conflict, poor Andean peasants often found themselves used as cannon fodder both by the guerrillas and the army.