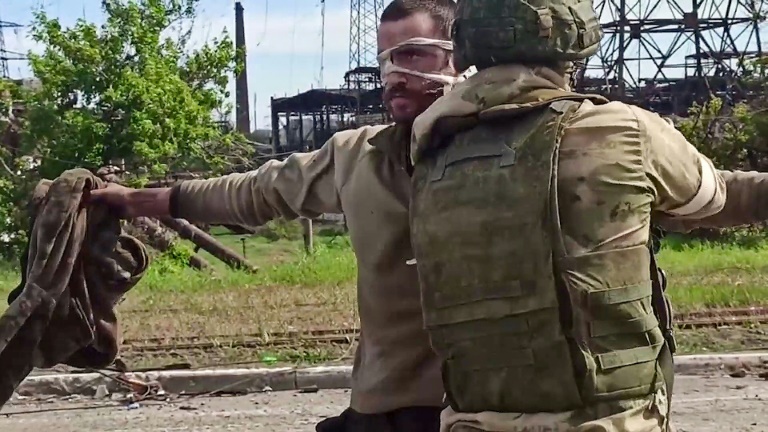 Russia says that the number of Ukrainian soldiers who have surrendered at the besieged Azovstal steel plant in Mariupol has risen to 1,730 after a third group of fighters laid down arms – Copyright AFP/File Behrouz MEHRI

– ‘No shortcuts’ to EU for Ukraine, says Scholz –

German Chancellor Olaf Scholz says there can be “no shortcuts” to EU membership for Ukraine, the second EU leader to quash Kyiv’s hope of fast-track membership in as many weeks.

Scholz says that making an exception for Ukraine would be unfair to the Western Balkan countries also seeking membership.

“The accession process is not a matter of a few months or years,” he warns.

On May 9, France’s President Emmanuel Macron warned it could take “decades” for Ukraine to join the bloc and suggested building a broader European club beyond the EU that could accommodate aspiring members.

Ukraine’s Foreign Minister Dmytro Kuleba condemns what he calls the “second-class treatment” of his country.

– Over 1,730 Mariupol fighters have surrendered: Russia –

Russia says that the number of Ukrainian soldiers who have surrendered at the besieged Azovstal steel plant in Mariupol has risen to 1,730 after a third group of fighters laid down arms.

In the past 24 hours, a further 771 militants emerged from the sprawling steel mill that has become a symbol of Ukrainian resistance, the Russian defence ministry says. A small number of fighters are believed to remain inside.

Ukraine persuaded the men to stand down to save their lives after weeks spent in the underground complex, with dire shortages of food, water and medicine.

Dozens of wounded have been taken to a hospital in a part of Ukraine’s eastern Donetsk region that is controlled by pro-Russian separatists and the rest are being kept in a prison colony, according to separatist leader Denis Pushilin.

Kyiv is hoping to exchange them for Russian prisoners but Pushilin suggested that some of them could be put on trial.

Sweden and Finland applied for NATO membership on Wednesday, renouncing decades of military non-alignment, over fears they could be future targets of Russian aggression.

Public support in the two countries for NATO membership skyrocketed after the Ukraine invasion.

Their applications face strong resistance, however, from NATO member Turkey, which accuses the two nations of harbouring anti-Turkish extremists.

A 21-year-old Russian soldier pleads guilty to killing an unarmed Ukrainian civilian at a war crimes trial in Kyiv, in the first such case to go to court since the start of the invasion.

Vadim Shishimarin from Irkutsk in Siberia admits to gunning down the 62-year-old man near the central village of Chupakhivka to prevent him from reporting a carjacking by fleeing Russian troops.

He faces possible life imprisonment for war crimes and premeditated murder after the case is heard by a district court in Kyiv.

– One dead in attack on Russian village –

Russia blames Ukraine for an attack on a border village in southwestern Russia that killed one person and wounded an unspecified number of others.

The governor of Kursk region says the victim in Tyotkino was a truck driver who was making a delivery to a distillery, which was struck “several times”.

Finance ministers from G7 nations hope to find a solution to Ukraine’s budget troubles at a meeting in Germany.

G7 partners have to “assure Ukraine’s solvency within the next days, few weeks”, German Finance Minister Christian Lindner tells the daily Die Welt ahead of the meeting.

The war has blown a hole in Ukraine’s finances, as tax revenue has dropped sharply, leaving it with a shortfall of around $5 billion a month.