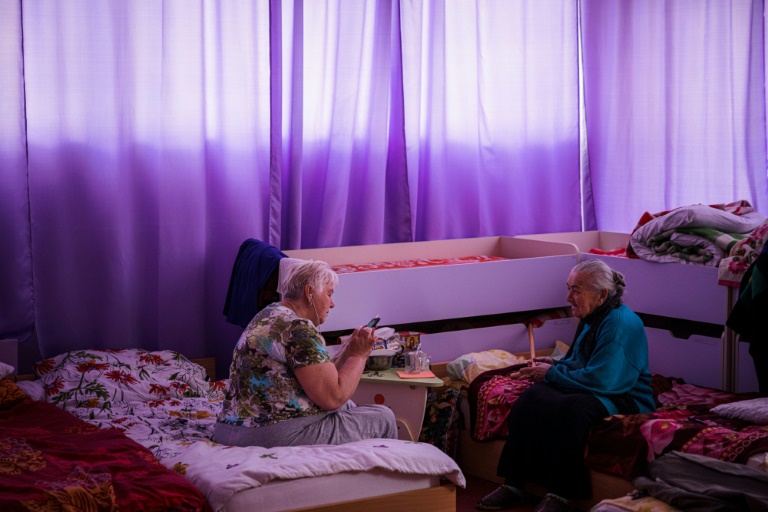 “If we come and there is only a hill of rocks,  where will we go back with family?” worries Galina Chistyakova, whose village of Ruska Lozova, north of Kharkiv, is now on the frontline, trapped between Russian and Ukrainian artillery fire.

Galina, 60, and around 80 evacuees have been sleeping for several nights in kindergarten number 420 in Osnoviansky, a district of Kharkiv that has been spared from the conflict.

Thousands of people evacuated from villages and districts of Kharkiv where shelling is raging are now refugees in Ukraine’s second-largest city, waiting until they can go back home.

“I don’t want to remember what happened. There is constant shelling. Everything is destroyed,” says Elena Rultseva, also 60 and from Ruska Lozova.

“The neighbours’ house is destroyed. Ours, we don’t really know. Our house was standing when we left. I am going to cry.”

The cashier wipes her eyes and continues. “We were occupied (by the Russians) for two months. The attack came on April 28. On the 29th, we evacuated the village by bus.”

She is not optimistic about returning soon.

“I hope to come back but because of the shelling it’s better to stay here.”

Rultseva was born in Ruska Lozova and returned to the village to live with her 82-year-old mother, Vera Primich, who is also sheltering at the kindergarten.

The infant school is a leafy green pool of calm in the centre of this high-rise suburb. Some of the evacuees while away their time tending the school garden.

“It’s good and quiet here,” Rultseva says. “We sew, chat, walk around, go to shops that are open. I don’t follow the news because I don’t want to remember the bad memories.”

“We are getting to know each other,” smiles her new friend Natalia Nichatova, who worked in a bakery before the war.

The 50-year-old lived in Saltivska, in the north of Kharkiv — one of the districts most badly damaged by the Russian firepower trained on the city.

On the night of the Russian invasion on February 24, she hid in a cellar in her building with her neighbours.

“It happened without any notice. Just shelling. It hit a neighbour’s apartment. Burned. It hit the roof, broke the water system. There was flooding.

“I spent a lot of time in the basement. There, we are not just neighbours, we are like family. We eat from one plate.”

Nichatova hid for two weeks underground before escaping to a friend’s house. In late April, she made it to the infant school. It took three sleepless nights before she started to feel safer and relax.

“It is a nice place in the kindergarten. It’s very comfortable. I get food every day and a doctor.”

But she would rather be at home and constantly frets about people left behind.

“It’s dangerous in Saltivska but our souls are in our houses. Every day I call my neighbours. I’m worried for them.”

The school’s deputy head, Viktoria Gorynimova, says she is proud to offer refuge to the evacuees. “The men are at war, the doctors are at the hospital. I am doing what I can to help.”

She hopes the kindergarten’s 12 classes will reopen in the autumn and has already prepared a happy surprise for pupils — one of the annexes is now home to a family of little rabbits.

Chistyakova brought them with her from Ruska Lozova. “We had three rabbits. The pregnant mother and husband we took with us in a bag. The babies are already born.”