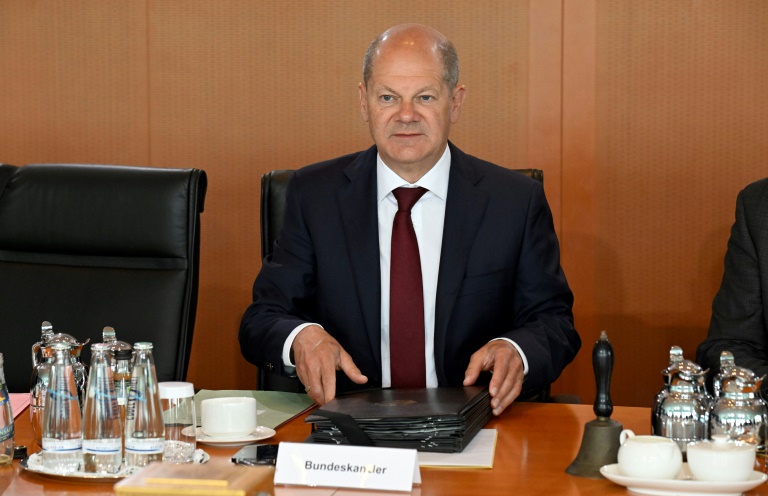 Eclipsed by two Green party ministers over his response to the war in Ukraine, Chancellor Olaf Scholz is battling to wrest back public approval — starting with a speech to parliament on Thursday.

Scholz, whose Social Democrats (SPD) are in power with the Greens and the liberal FDP, has faced a barrage of criticism over his perceived weak response to the war, including his hesitancy over sending heavy weapons to Ukraine.

Scholz’s party suffered a crushing defeat in a key regional election at the weekend, losing to the conservative CDU with its worst-ever result in Germany’s most populous state of North Rhine-Westphalia.

The Greens, meanwhile, almost tripled their score compared with five years ago to finish in third place and look almost certain to be part of the next regional government.

Der Spiegel magazine called the result a “personal defeat” for Scholz after he was heavily involved in the election campaign, appearing on posters and at rallies.

Already famous for his lack of charisma before he became chancellor, Scholz now appears to be paying the price for dragging his feet in dealing with Moscow over fears of escalating the crisis.

In a bid to win back the public, Scholz has in recent days given lengthy television interviews.

On Thursday, he will be explaining his policy to lawmakers ahead of the EU summit at the end of May.

In a devastating reading of Scholz’s outings so far, the weekly Focus assessed that “his language is poor, his facial expressions monotone and his body language too understated.”

According to Der Spiegel, the chancellor’s communications strategy seems to revolve around one mantra: “Repeat, repeat, repeat.”

Other media have accused him of stubbornly sticking to the same plan and ignoring what is going on around him.

“His party is plummeting, but the chancellor feels that he has done everything right… Doubts and questions rain down on him, but Olaf simply sits tight,” said Der Spiegel.

Scholz’s spokesman Steffen Hebestreit has defended the chancellor, suggesting that the public value his calm demeanour and would find it “inauthentic” if he tried to turn himself into Barack Obama.

But for political scientist Ursula Muench, Scholz does not come across as calm and measured but rather “imprecise” compared with his colleagues from the Green party.

Scholz has also not been helped by the fact that Defence Minister and fellow SPD politician Christine Lambrecht is currently caught up in a storm of criticism for allowing her son to accompany her on a government helicopter on their way to a family vacation.

Baerbock, meanwhile, has turned around her public image after a series of blunders during the 2021 election campaign, coming across as clearer and more decisive than Scholz in her response to the Ukraine crisis.

The 41-year-old former trampolinist has become the face of Germany at international summits, from the G7 to NATO, and in early May became the first German minister to visit Kyiv.

Habeck, meanwhile, has impressed with his dedication to weaning Germany off Russian energy.

And their meteoric rise is all the more surprising given the Green party’s traditional positioning as a pacifist party opposed to sending weapons to conflict zones.

For the first time in their 42-year history, according to Der Spiegel, the Greens are being judged not on “expectations and promises” but on their performance in government.

“The strong moral underpinning of the Greens’ policies and the fact they openly struggle with their own principles comes across as approachable and therefore very credible,” according to Muench.

“Of course, this increases their clout compared with the chancellor.”

She therefore predicts an “increase in tensions” between the Greens, the SPD and the FDP, with life not expected to get easier for Scholz any time soon.