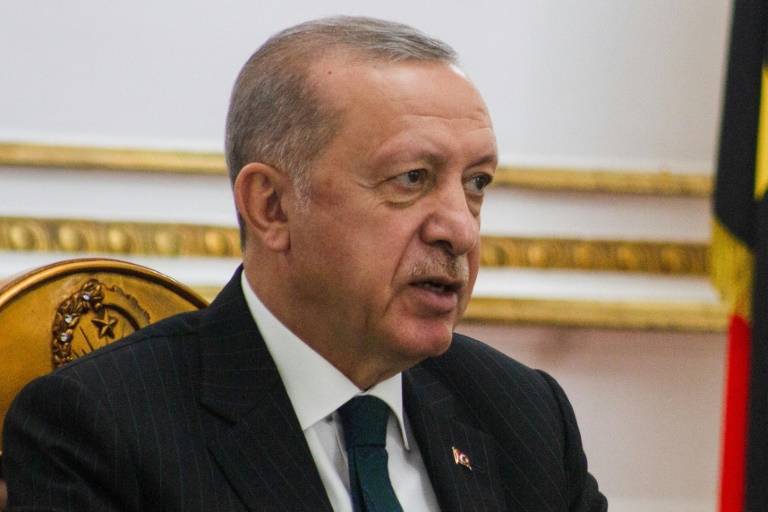 Turkish President Recep Tayyip Erdogan, seen here during a official state visit to Angola at the Presidential Palace in Luanda earlier this month, has been travelling to Africa to drum up business for Turkish companies – Copyright AFP Behrouz MEHRI

The Russian invasion of Ukraine has created a major shift in European geopolitics in what looks to end up being a major NATO crisis, and all because Erdogan is flexing Turkey’s political muscles.

Initially, on Monday, Erdogan demanded the two Nordic states end their supposed support for the Kurdish Workers’ party (PKK), which Turkey regards as a terrorist organization, and that NATO lift its ban on arms exports imposed in October 2019 after the Turkish incursion in northern Syria.

However, after Finland and Sweden formally submitted their applications for joining NATO on Wednesday morning with much publicity, Erdogan promptly blocked a procedural vote on NATO moving ahead quickly with the membership applications and extended his demands from the two he outlined on Monday to 10, leading to claims that he is using blackmail.

On Thursday, according to Business Insider, Recep Erdogan shared a video of an interview that he did on Wednesday on his Twitter account.

He said, according to a translation: “We will continue our policy in a determined way. We have told allies that we will say no to Finland and Sweden’s NATO membership.”

NATO could be tangled in knots for months

The Guardian is reporting that Turkey’s demands could tie up NATO for months, creating a major task for alliance diplomats to establish Erdoğan’s seriousness and the price that would have to be paid to make him back down and prevent a full-blown Nato crisis.

Finland’s president, Sauli Niinistö, said he spoke with Erdoğan a month ago and none of his current concerns were aired, while Sweden’s foreign minister, Ann Linde, was upset after being quoted in the Turkish press saying the Turks regard all Kurds as terrorists. She insists she never made those remarks, had never met the PKK, and would not do so.

The additional demands include six alleged PKK members Turkey is seeking to extradite from Finland and 11 from Sweden. And if you add in people accused by Turkey of supporting the US-based cleric Fethullah Gülen, who Ankara accuses of orchestrating the 2016 coup attempt, then Turkey wants 12 people returned from Finland and 21 from Sweden.

Turkish media has reported what it describes as other examples of a “soft” Swedish attitude to terrorism, including evidence that the Syrian branch of the PKK has held meetings in Stockholm hosted by the Swedish foreign office.

Turkey also says that in 2019 PKK supporters held a protest in a shopping center in support of the jailed leader Abdullah Öcalan and Swedish security forces did nothing to prevent them from carrying the PKK’s “flag” and pictures of Öcalan.

The PKK is a Kurdish guerrilla group that has fought a decades-long separatist insurgency in parts of Turkey, reports the New York Times. It was designated by the United States as a terrorist organization in 1997.

It is hard to ignore the demands

It has become increasingly clear that both Nordic countries have underestimated Erdogan, along with the NATO alliance. Jonathan Eyal, the associate director of the Rusi think tank, said Erdoğan “lives on the edge and operates through brinkmanship”.

Eyal added: “Many of his demands about the PKK are part of a familiar Turkish tune. But he has domestic reasons to be standing up to America. The economy is in tatters and his popularity is at an all-time low.”

“It is not possible for either country … to change its domestic legislation on freedom of assembly,” he said. “Sweden in particular has an active Kurdish community that has political support. This episode is reminiscent of 2009 when Erdoğan said he would not allow Anders Rasmussen to be appointed Nato’s secretary-general unless Denmark closed a Kurdish TV station. Rasmussen was appointed but a year later the TV station was closed.”

Eyal argues Erdoğan’s target is as likely to be the US as Finland and Sweden. Turkey’s 2017 purchase of Russia’s S-400 missile defense system turned it into a pariah in the US and led to Ankara being kicked out of the F-35 stealth fighter jet program.

With President Recep Erdogan being the odd-man-out in the NATO alliance, his political concerns will still have to be addressed – or he will continue to block the action of all the NATO allies, even temporarily.