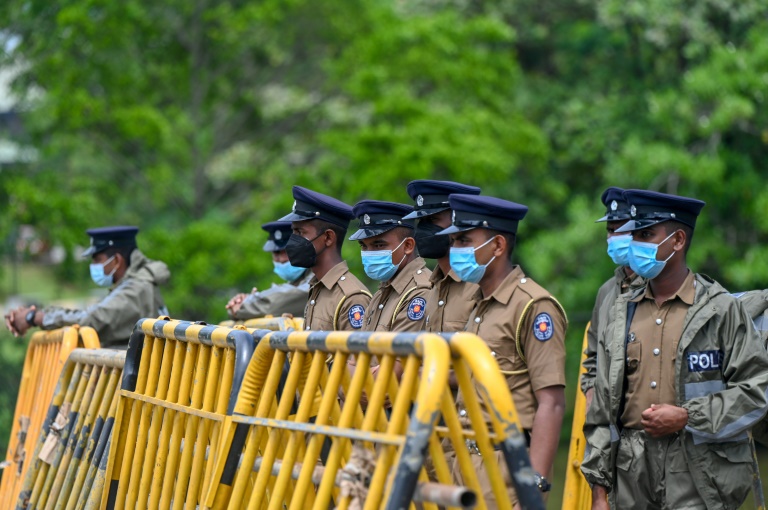 At least nine people were killed and more than 225 wounded in the violence that followed a mob attack on anti-government protesters last week, authorities say – Copyright AFP ISHARA S. KODIKARA

The members of parliament, both from President Gotabaya Rajapaksa’s party, were questioned by criminal investigators on Tuesday evening and detained overnight, a police official said, speaking on condition of anonymity.

“There is direct evidence against the two MPs and that is why they were arrested,” the official said.

Sanath Nishantha and Milan Jayathilake were among 22 politicians — including former prime minister Mahinda Rajapaksa and his son Namal — whose passports were impounded last week following allegations that they instigated violence.

On May 9, thousands of ruling party supporters who were bussed into the capital attacked a peaceful demonstration by anti-government protesters demanding President Rajapaksa resign over an economic crisis that has paralysed the country.

More than 225 people were hospitalised from the violence, according to health officials.

Police say they have arrested about 500 people in connection with the violence and retaliation.

Thousands continue to demonstrate outside the president’s seafront office in Colombo, demanding he resign over an economic crisis that has resulted in acute shortages of food, fuel and essential medicines.

The shortages have been accompanied by record inflation and lengthy blackouts, bringing severe hardships to Sri Lankans, who are experiencing the country’s worst financial crisis since independence from Britain in 1948.

Wickremesinghe has the crucial support of two main opposition parties to form a “unity government” aimed at pulling the country out of the crisis, but had yet to form a full cabinet.

Four ministers were appointed on Saturday. Official sources said Wickremesinghe was still in talks with potential coalition partners to finalise his cabinet.

The prime minister was expected to also take on the crucial finance portfolio for ongoing bailout talks with the International Monetary Fund.

“We will not be able to supply petrol in the next two days and I appeal to motorists not to queue up,” Wijesekera said in parliament.

He said the government managed to raise 53 million dollars for a petrol tanker that was already at the Colombo port and was awaiting full payment before unloading.

“It will be Saturday or Sunday before we can distribute petrol, but we have a reserve for essential services like ambulances,” Wijesekera said.

The foreign exchange crisis has also led to shortages of 14 essential drugs, including anti-rabies vaccines.