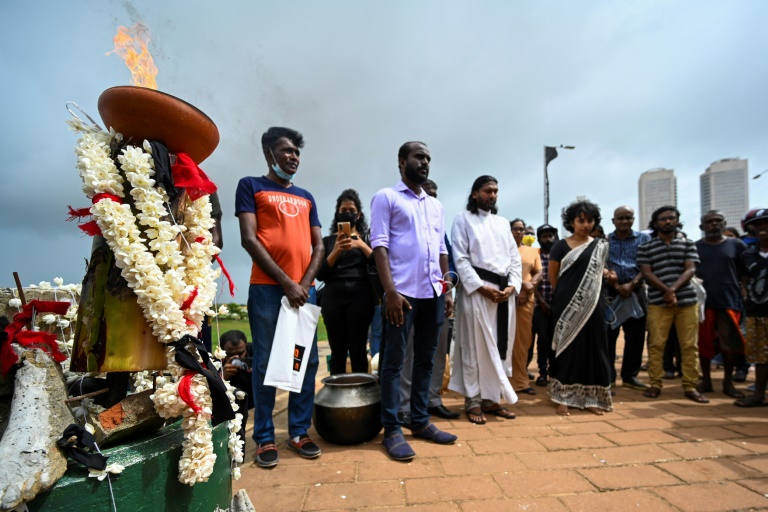 Thousands of Tamils killed in Sri Lanka’s decades-long separatist war were commemorated on Wednesday for the first time outside the minority’s heartland in the north and east of the country.

Clergy from Buddhist, Hindu and Christian communities offered prayers in Colombo and lit a clay lamp for those who perished between 1972 and May 2009 when the fighting ended.

The ceremony coincided with the 13th anniversary of the ending of hostilities.

“This is highly symbolic and very important for Tamils,” Tamil legislator Dharmalingam Sithadthan, an MP from the northern Tamil heartland of Jaffna told AFP.

“In previous years, there were private memorials held in secret, but this public event is highly welcome.”

Any remembrance of Tamil war victims had been banned under Sri Lanka’s powerful Rajapaksa family which is currently under siege over the country’s dire economic crisis.

The head of the separatist Tamil Tiger movement, Velupillai Prabhakaran, was shot dead by security forces on May 18, 2009, bringing a formal end to the bloody ethnic war.

Current President Gotabaya Rajapaksa led the government’s military campaign against the Tigers as the head of the defence ministry under his president brother Mahinda.

Mahinda stepped down as prime minister last week after weeks of protests over severe shortages of food, fuel and medicines.

The government defaulted on its $51 billion foreign debt last month as it ran out of dollars to finance even the most essential imports.

On Wednesday, volunteers offered porridge to passers-by as a symbol of the humble food that tens of thousands of Tamils were left with during the final stages of the war.

“The kanji (porridge) was the life-saving food for Tamil people in the last stages of the war,” a Hindu priest said at the ceremony. “They struggled in the midst of shelling and bombing and underwent untold suffering.”

Government forces imposed an economic embargo, ordered civilians into what they called “no-fire zones” and allegedly bombarded them killing an estimated 40,000 Tamils.

Successive Sri Lankan governments have denied allegations that troops committed war crimes but have refused to allow any independent investigation.

“I sincerely hope this is also a first step towards real reconciliation in Lanka and that we can join the call for justice and accountability,” she said on Twitter.

The UN Human Rights Council last year set up a mechanism to preserve evidence of war crimes in Sri Lanka so that prosecutions could take place in the future.