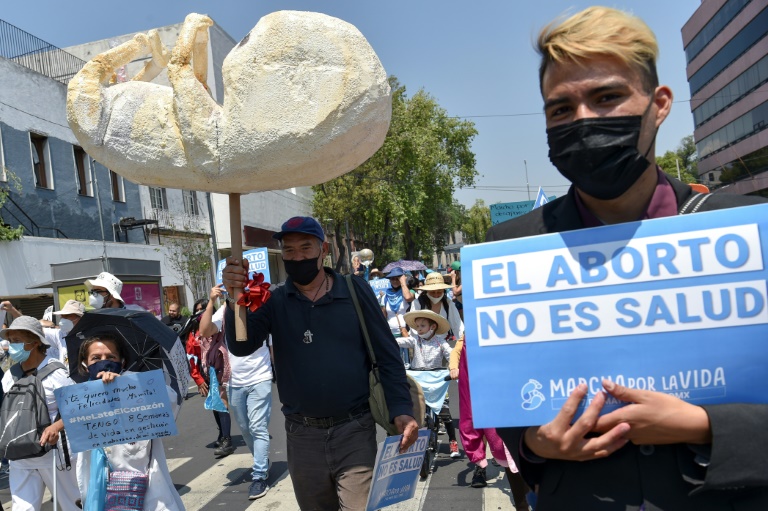 People take part in a march against the legalization of the abortion in Mexico City, on May 7, 2022. – Copyright GETTY IMAGES NORTH AMERICA/AFP/File Ethan Miller

Mexico’s southern state of Guerrero on Tuesday decriminalized abortion in the first 12 weeks of pregnancy, becoming the eighth region in the conservative Latin American country to do so.

The state legislature said the reform, which was promoted by President Andres Manuel Lopez Obrador’s Morena party, was approved by 30 votes in favor and 13 against.

Guerrero is among the poorest of Mexico’s 32 states and women in some communities are forced to marry and become mothers from a young age.

The state, plagued by violence linked to drug trafficking, also has high rates of rape of women and deaths from clandestine abortions, according to local legislator Beatriz Mojica.

“Many of the women who are raped are girls and are forced to continue their pregnancy,” she told Milenio television.

Abortion has also been decriminalized in Mexico City and the states of Oaxaca, Baja California, Sonora, Colima, Veracruz and Hidalgo.

Earlier this month around 2,000 people marched in the Mexican capital to demand the right to legal abortion be revoked, at the encouragement of the Catholic church and conservative groups.

In September 2021, the Supreme Court declared the laws criminalizing abortion unconstitutional, authorizing it de facto throughout the country.

That ruling allows women who live in states where abortion is still forbidden to file a legal recourse so that health institutions perform an abortion on them.