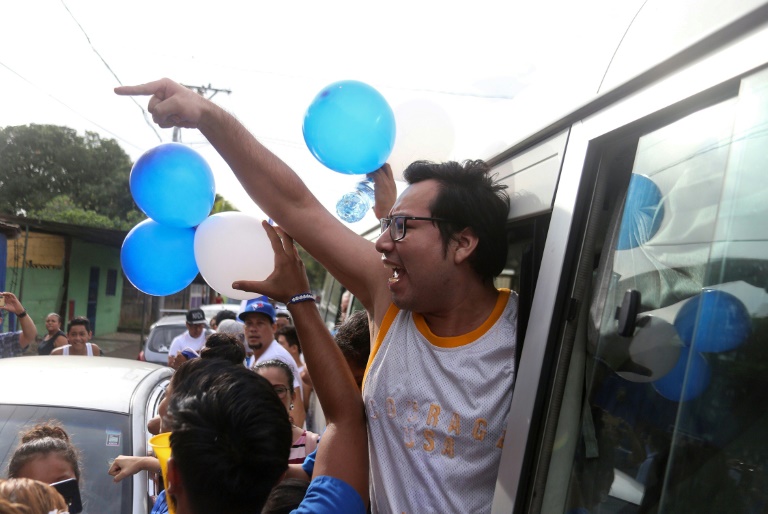 Nicaraguan opposition figure Yubrank Suazo — seen here after release from prison on June 11, 2019 — has once again been detained, according to a local human rights group – Copyright 14 Peaks Expedition/AFP –

Suazo will be held for at least 48 hours in Managua at the notorious El Chipote jail pending an investigation, the Nicaraguan Human Rights Center (CENIDH) said.

“We condemn this act and demand his immediate release and respect for his personal integrity.”

Over the weekend, the 31-year-old claimed police were watching his parents’ house — where he lives — in the southwestern city of Masaya, as well as a church run by a priest critical of the government.

Suazo is a director of the opposition Civic Alliance for Justice and Democracy coalition and took part in the 2018 anti-government protests in Masaya.

The city had declared itself in rebellion against ex-guerrilla Ortega’s government as part of massive nationwide street protests.

The government’s crackdown on the demonstrations left 355 dead.

Suazo was arrested and only released in June 2019 following negotiations between the government and opposition that led to the liberation of 600 people.

He is “one of the most persecuted” people in the country, Suazo’s lawyer Yonarqui Martinez told the Articulo 66 website.

A Nicaraguan NGO campaigning for political prisoners says there are 182 opposition figures detained in the country.

Some 45 opposition figures, including seven presidential hopefuls, were arrested last year ahead of the November elections, in which Ortega benefitted from the lack of credible opposition to win a fourth successive term in office.

They were sentenced this year to up to 13 years in prison for allegedly “undermining” national security.

Ortega accuses his opponents of trying to oust him with help from Washington, which has hit him and his inner circle with sanctions.