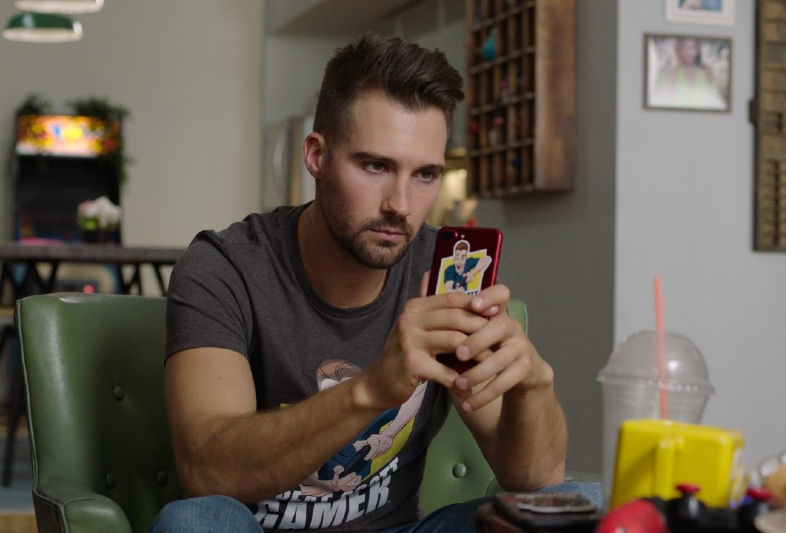 James Maslow in ‘We Need to Talk.’ Photo Courtesy of Global Digital Releasing.

Multifaceted entertainer James Maslow chatted about his new film “We Need to Talk.”

He is known for his acting work in the Nickelodeon series “Big Time Rush,” and the band of the same name, which will be on their “Forever Tour” this summer.

The film has been available on Digital and VOD since Friday, May 13. It was released via Global Digital Releasing. “It was so much fun to make,” he said about “We Need to Talk.”

In this romantic comedy, written and directed by Todd Wolfe, Scott (James Maslow) is a self-absorbed online video game influencer, who speaks to millions of fans every day but simply cannot (or will not) communicate with the people he loves. “It kind of is like a romantic comedy but to me, it felt like a situational comedy,” he said. “The gaming part came into play but it wasn’t revolving around the world of gaming.”

Scott remains blissfully unaware that he’s the problem until one morning, as she’s walking out the door, his girlfriend Aly (Emmy winner Christel Khalil) tells him, “we need to talk.” “Christel is awesome. She was so easygoing and fun to work with,” he exclaimed.

Her comment sends Scott spiraling into a day-long tailspin as he seeks wisdom, advice, and emotional support from his social media network of friends, internet trolls, and a myriad of online characters from around the world. “The heart of the story is Scott realizing that he neglected the most amazing girlfriend in exchange for everybody else that he doesn’t even necessarily know. He puts pressure on himself and becomes a bit of a prick, and he spirals out of control once he realizes what is happening,” he said.

“Todd Wolfe and the team assembled a stellar cast, and he made my job extremely easy. He showed up with an incredible crew and everybody was on their game with no egos. He is such a nice easygoing guy and because of that, we got out early some days. It was fantastic to work with Todd,” he added.

Maslow acknowledged that filming in Philly was cool. “I hadn’t spent so much time there. It’s a beautiful city and it was nice to change it up. I really enjoyed it there,” he said.

He praised them for doing a “good job” with the film’s musical score.

Most recently, he has been getting into YouTube vlogging. “I am starting to dabble into that world,” he said. “Honestly, I just got a new computer because my old one was seven years old, so I am excited, because I want to get better in editing and shooting.”

When asked about his personal favorite stroke in swimming, Maslow responded, “The breaststroke. When I am surfing I would do the traditional freestyle but when I am in the ocean, I never get the turning and breathing right, so for me, it’s easier to paddle sideways and just see my head above water.”

Maslow had great words about Jeff Timmons, the founding member of 98 Degrees. “Jeff and I keep in touch once in a while. I bump into him in Las Vegas every once in a while,” he said.

He defined the word success as “freedom.” “Honestly, the freedom to greenlight the movies, TV shows, and projects that I want to do as an actor. The same thing with touring and Big Time Rush,” he said.

“Success is the freedom to do my craft when I want to and not be subject to everyone else’s availability,” he added.

For his fans, he remarked about “We Need to Talk,” “It was a fun project to do. Watch it and forget your worries for an hour and a half. It’s a comedy, it is meant to make you laugh and it is not intentionally trying to be provocative. We wanted to create a fun, lighthearted comedy that hopefully people will be able to relate to, and let their minds rest and relax.”