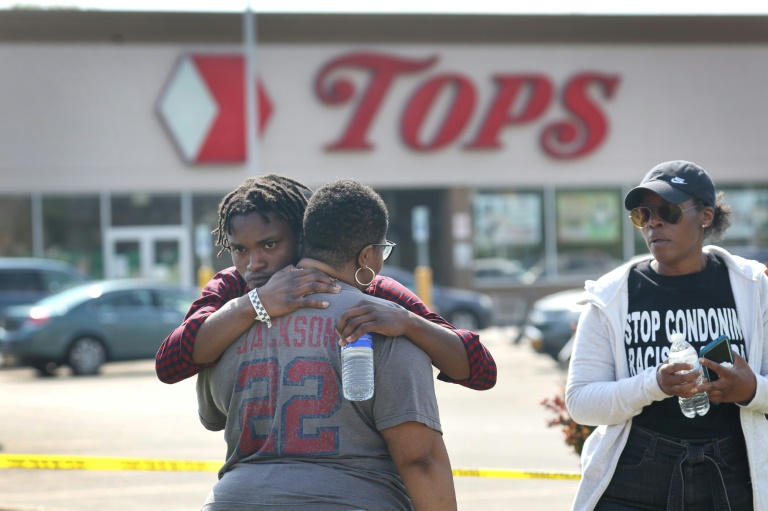 The teenager charged with shooting dead 10 African Americans at a supermarket in Buffalo, New York followed an insidious racist creed gaining ground among white Americans that minorities are taking over society.

The Christchurch killer had warned in a manifesto of a “Great Replacement” of white Christians of European descent by Blacks, Jews, Muslims, Latinos and others, a theory that has found an increasing echo in American right-wing politics and on cable news.

Lifting often word-for-word from the rambling text, Gendron produced a chilling 180-page manifesto of his own — in which he stated his goal: to “kill as many Blacks as possible.”

Gendron himself came from a rural town in New York state that had a very small number of non-white residents.

He learned his hate almost exclusively online, a pattern of “radicalization” that law enforcement authorities say has only increased in recent years to become a major threat for the United States.

Gendron drove 200 miles (320 kilometers) to the Tops market in Buffalo to carry out his attack in a neighborhood he knew had a large African American population, during the busiest shopping period of the week.

They live in a modest two-story home, with a large, well-manicured lawn, down a quiet rural lane in Conklin, New York.

Nested on the winding Susquehanna River and surrounded by forests and small farms, Conklin has a handful of trucking and distribution centers, and the headquarters for an electronics company.

Gendron finished high school in June 2021 after a rough 18 months of dealing with the Covid-19 pandemic, when students were often isolated in their homes with classes online and personal interactions more than ever confined to social media.

The New York Times quoted classmates saying he was generally quiet, even “reclusive,” and preferred courses online even when in-person classes resumed.

He had an interest in guns common among rural US teens. But by his final year authorities had received a warning about him.

Law enforcement officials said that last year, before graduating, Gendron said his plans for the future were undertaking a murder-suicide.

He was given a psychiatric assessment, and claimed he had been joking. Released after a few days, his case was apparently then forgotten until the massacre on Saturday.

In his writing Gendron said he came by his views while surfing the often radical discussion site 4chan and other conspiracy-theory websites amid “extreme boredom” during Covid lockdowns.

Much of his manifesto is lifted directly from the “Great Replacement” text posted by the Christchurch killer, Brenton Tarrant, which claims that white Europeans were threatened by “ethnic replacement” and “genocide.”

“Brenton started my real research into the problems with immigration and foreigners in our white lands, without his livestream I would likely have no idea about the real problems the West is facing,” Gendron wrote.

Gendron spelled out in meticulous detail his plans for the attacks, choosing the target, selecting his arms, body armor, and other equipment, and how he would live-stream it with a helmet-mounted camera, just as Tarrant had done.

Despite its links to mass murders, the “Grand Replacement” conspiracy theory has become increasingly mainstream in conservative circles in Europe and the United States in the past decade.

It was touted at a 2017 national gathering of right wing groups in Charlottesville, Virginia.

And it was cited by the man who shot dead 22 people, many of them Latinos, at a Walmart in El Paso, Texas in August 2019, and who declared he was “defending my country from cultural and ethnic replacement brought on by an invasion.”

According to an AP-NORC poll last December, nearly half of all Republicans believe immigrants are replacing native-born Americans.

And The New York Times counted 400 occasion on which Tucker Carlson, the star of Fox News, has pushed the idea of whites being replaced by other groups.

Liz Cheney, the dissident Republican representative, warns that her party is dangerously promoting the view.

“History has taught us that what begins with words ends in far worse.”