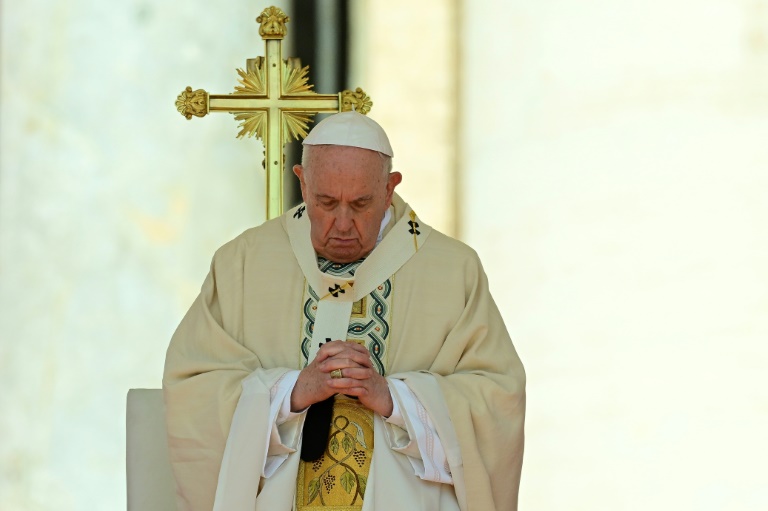 Unlike in recent days, Pope Francis — who was surrounded by around 50 cardinals and 300 bishops and priests — did not appear in a wheelchair – Copyright AFP INA FASSBENDER

Pope Francis on Sunday canonised a Frenchman murdered in the desert, a Dutch priest killed in a Nazi concentration camp and an Indian lay convert among 10 new saints officially proclaimed on Sunday.

Thousands of people from around the world crowded into St Peter’s Square in the Vatican for the canonisation mass, presided over by the 85-year-old pontiff and attended by delegations including France’s interior minister Gerald Darminin and Italian president Sergio Mattarella.

The pictures of the 10 new saints were hung on the facade of the world’s biggest basilica.

Unlike in recent days, Francis — who was surrounded by around 50 cardinals and 300 bishops and priests — did not appear in a wheelchair.

Under a sunny sky, groups of pilgrims had begun to converge on the square, some wearing shirts or scarves with the picture of one of the new saints.

Under the rules of the Catholic Church, all 10 have already been beatified, or named “blessed”, but had to then be attributed a miracle to take the final step to sainthood.

The new saints included Charles de Foucauld, a French soldier and explorer, who became a Catholic priest and lived among Trappist monks in Syria, in Palestine, and finally among the Tuaregs in the Algerian desert.

He was murdered by bandits on December 1, 1916, but his works outlasted him and he became one of France’s most celebrated men of faith.

Another who made the step to sainthood was Dutch Carmelite priest, theologian and journalist Titus Brandsma, who took a stand against the Nazis during World War II.

He spoke out against them before Germany invaded the Netherlands in 1940 and afterward, encouraging Catholic Dutch newspapers to resist the occupiers’ propaganda.

Brandsma was arrested in January 1942 and ended up in the Dachau concentration camp, where he died on July 26 of that year, after being injected with carbolic acid.

He was beatified in 1985 after being declared a martyr, and was subsequently found to have enacted a miracle in healing a Carmelite priest.

Devasahayam Pillai, known as Lazarus, was the first Indian layman to become a saint, according to the Vatican.

A Hindu from what is now the southern state of Tamil Nadu, he converted to Catholicism in 1745 while working at the royal palace, where he met a captured Dutch commander who taught him about Christianity.

But his faith, and his preaching of equality of all peoples — a revolutionary view at the time — caused a stir and when he refused to renounce his new religion, he was arrested, according to the Vatican.

After almost three years of imprisonment and torture, during which he began to be visited by pilgrims, he was shot dead in a forest on the orders of the king on January 14, 1752.

He was declared a martyr and beatified in 2012, before being later attributed the miracle of resuscitating a foetus in the 20th week of pregnancy.