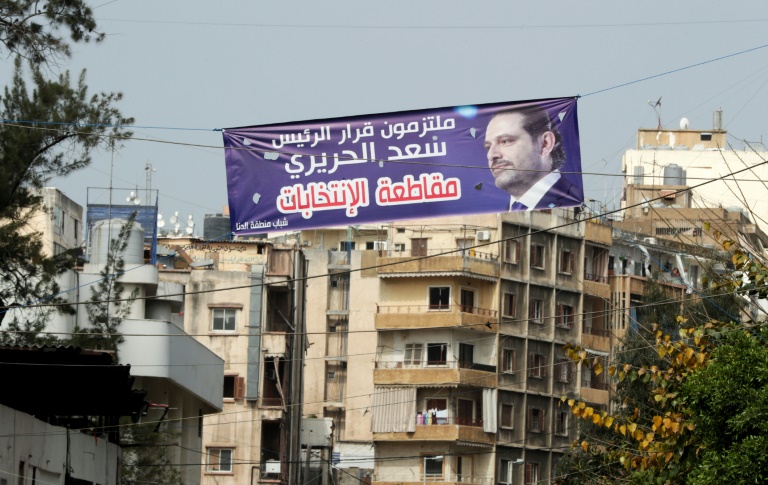 Lebanon’s Sunni Muslim community is gearing up for Sunday’s parliamentary polls without strong leadership for the first time in decades after former premier Saad Hariri stepped down from political life.

In a country where government posts and parliamentary seats are distributed along sectarian lines, Lebanon’s Sunni community has long served as a major political force.

Months ahead of the May 15 vote, Hariri announced his retreat from political life, leaving his constituents without a preeminent Sunni figure while the country grapples with an unprecedented financial crisis.

His Future Movement party in March said it would boycott the election, a move that experts believe could empower political rivals, mainly the Iran-backed Shiite Hezbollah movement.

“Traditional Sunni leaders, including former premiers, are mobilising… to prevent Hezbollah from taking advantage” of the political void, said Karim Bitar, an international relations professor at the University of Saint Joseph in Lebanon.

The Future Movement, Lebanon’s biggest Sunni-led party, currently has 18 lawmakers in the 128-member parliament, which makes it one of the largest blocs.

Its decision to boycott polls has created internal rifts. One former deputy, Mustafa Alloush, relinquished his party membership so he can challenge Hezbollah in the elections.

“When we withdraw from the scene, we give our adversaries a chance,” he told AFP, advocating for a unified front to thwart Hezbollah’s growing dominance.

Hariri was thrust into the political limelight following the 2005 assassination of his father Rafic, also an ex-prime minister.

In the wake of the tragedy, Hariri played a major role in mass demonstrations that ended a 30-year Syrian military presence in Lebanon.

He was at the helm of the pro-Western “March 14” bloc that won a parliamentary majority in 2009 but unravelled not long after.

During the last vote, in 2018, Hariri’s bloc lost nearly a third of its parliamentary seats.

Many attributed the three-time premier’s waning popularity to his conciliatory approach towards Hezbollah, which angered allies, including Saudi Arabia.

The kingdom has long pushed for a more aggressive policy towards the Iran-backed group which is Lebanon’s main political and military force.

“There is no doubt that to avoid a civil war I had to compromise,” Hariri said in January.

“This worry guided all my steps, made me lose my personal fortune, as well as some friends abroad and many allies.”

In November 2017, Hariri stepped down as prime minister while in Riyadh, prompting accusations that the kingdom was holding him against his will.

French President Emmanuel Macron had to intervene to secure Hariri’s return to Lebanon from where the Sunni leader then rescinded his resignation.

The Hariri family has been a mainstay of Lebanon’s political scene since the end of the 1975-1990 civil war and rarely absent from elections.

They are not the only prominent Sunni figures missing from this year’s campaign. Ex-prime ministers Fouad Siniora and Tammam Salam have also stayed out of the electoral race, amid calls for a boycott.

However, Dar al-Fatwa, the country’s top Sunni religious authority, warned of the dangers of abstention.

Current Prime Minister Najib Mikati, whose post is held by a Sunni under a longtime convention, encouraged his fellow Sunnis to cast ballots.

Bitar sees “the re-emergence of several Sunni poles” and said various actors “will seek to fill the void while waiting for a possible return of Saudi influence and Saad Hariri”.

In Beirut’s Tariq el-Jdideh neighbourhood, a Future Movement stronghold, giant portraits of Hariri lined the sides of the road.

Banners called on residents to boycott the election, but not everyone was convinced.

“We are going to vote because we do not accept that other parties take advantage of the situation,” a 60-year-old man who gave his name as Ahmad, said, referring to Hezbollah.

Another resident, Anwar Ali Beyrouti, said “the division of the Sunni camp serves the interests of Hezbollah”, adding that the Shiite party would be “the only one benefiting”.