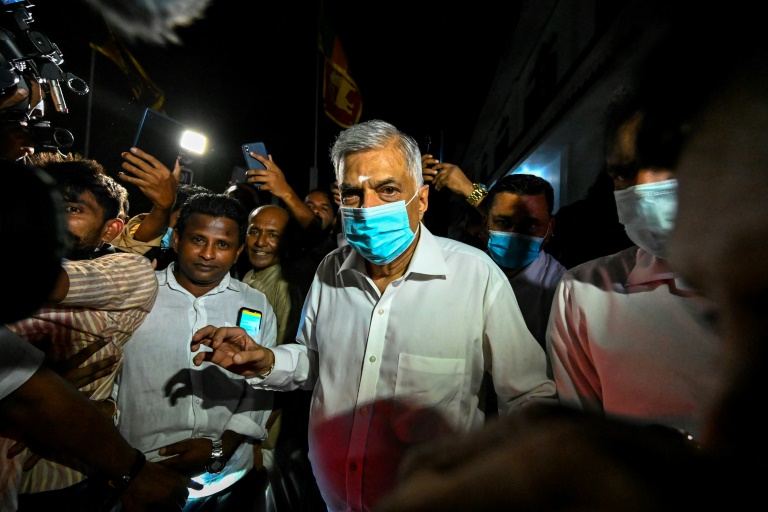 Ranil Wickremesinghe was sworn in late Thursday to navigate his country through the worst downturn in its history as an independent nation, with months of shortages and blackouts inflaming public anger.

The 73-year-old insists he has enough support to govern and approached several legislators to join him, but three opposition parties have already said his premiership lacks legitimacy.

Senior opposition lawmaker Harsha de Silva publicly rejected an overture to take charge of the finance ministry and said he would instead push for the government’s resignation.

“People are not asking for political games and deals, they want a new system that will safeguard their future,” he said in a statement.

De Silva said he was joining “the people’s struggle” to topple President Gotabaya Rajapaksa and would not support any political settlement that left the leader in place.

Huge public demonstrations have for weeks condemned Rajapaksa over his administration’s mismanagement of the worsening economic crisis.

Hundreds remain outside his seafront office in the capital Colombo at a protest camp that has for the past month campaigned for him to step down.

De Silva is a member of the Samagi Jana Balawegaya (SJB), the largest single opposition grouping in parliament, which had appeared ready to split over the question of whether to support Wickremesinghe.

But the head of the possible splinter faction, Harin Fernando, said Friday he had returned to the fold.

“I will not support Wickremesinghe’s government,” Fernando told AFP.

Two smaller parties have also signalled they will not join any unity government.

The Tamil National Alliance said Rajapaksa’s administration had “completely lost legitimacy” with the appointment of Wickremesinghe, a five-time former prime minister who most recently held office in 2019.

The leftist People’s Liberation Front (JVP) meanwhile said new national elections were the only way out of the current impasse.

“We can’t solve the economic crisis by having an illegitimate government,” JVP leader Anura Dissanayake told reporters in Colombo. “We demand fresh elections.”

However, the cash-strapped government is unlikely to be able to afford polls, or even print ballots, at a time when a national paper shortage forced schools to postpone exams.

Parliamentary elections are not due until August 2025.

Sri Lankans have suffered months of severe shortages of food, fuel and medicine — as well as long power cuts — after the country burnt through foreign currency reserves needed to pay for vital imports.

The central bank chief warned this week that the island nation’s economy was just days from “collapse beyond redemption” unless a new government was urgently appointed.

Wickremesinghe warned Thursday that the dire situation could get worse in the coming months and called for international assistance.

“We want to return the nation to a position where our people will once again have three meals a day,” he said.

Mahinda Rajapaksa, the president’s brother, resigned as prime minister on Monday after his supporters attacked anti-government demonstrators who had been protesting peacefully.

At least nine people were killed and more than 200 injured in ensuing clashes, with dozens of Rajapaksa loyalist homes set on fire by furious mobs.

Mahinda has since been banned by a court from leaving the country and has taken refuge at the Trincomalee naval base in Sri Lanka’s east.

Troops have largely restored order and a nationwide curfew has been in effect for most of the week.

The Indian and Japanese envoys in Colombo were among the first to call on Wickremesinghe soon after he officially assumed duties on Friday.

The new premier is seen as a pro-West, free-market reformist, potentially making bailout negotiations with the International Monetary Fund and others smoother.