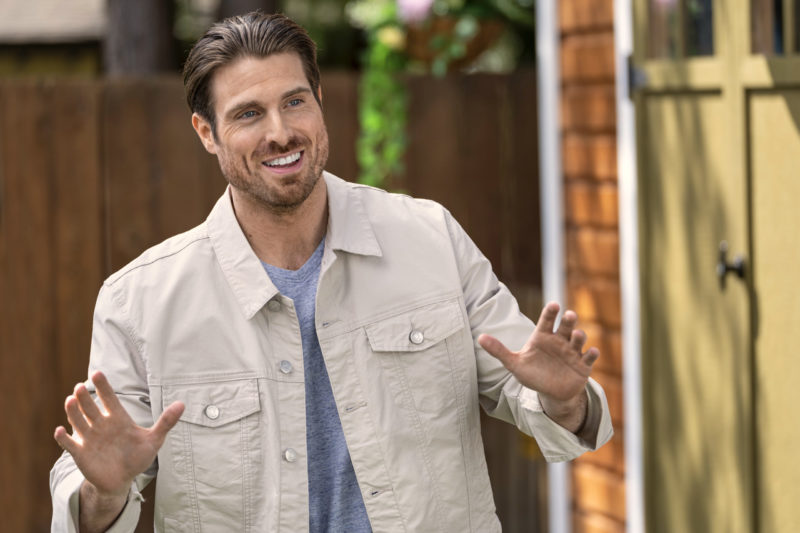 Actor Marcus Rosner chatted about his new original Hallmark movie “Romance to the Rescue,” which will premiere on Saturday, May 21.

Rosner stars in “Romance to the Rescue” alongside Andrea Brooks and Nathan Witte. “I am very excited about this movie,” he said. “I loved working with Andrea Brooks, this was her debut as a leading lady on the Hallmark channel, and honestly, she is as good as it gets.”

“It is great to be a part of the Hallmark family,” he admitted. “They found me early in my career, and they have taken me in, and they have always been nurturing my career. Doing this movie was a ton of fun, it was quick, and it felt like summer camp. I honestly loved it.”

Kyra (Andrea Brooks) is goal-oriented in all aspects of her life, from professional to personal.

When she meets Trevor (Nathan Witte), the new manager at the grocery store where Kyra works, he seems to check off all the boxes when it comes to what she’s looking for in love. When her well-meaning co-worker and friend Mark (Benjamin Charles Watson) tells dog-loving Trevor that Kyra has an agility-trained dog, she plays along.

When Trevor tells her he can’t wait to see Kyra enter her dog in the upcoming agility contest the store is sponsoring, Kyra is faced with a canine quandary. She quickly adopts an adorable dog, Sam, from a local shelter but it soon becomes clear she needs help on the training front.

Although he’s hesitant at first, Kyra convinces Kevin (Marcus Rosner), the head of the shelter, to put his training skills to use and help her get Sam competition-ready.

As the two spend time together, not only does Sam begin to flourish at agility, but Kyra and Kevin start to fall for each other. But when Kevin learns why Kyra adopted Sam and needed to train him in a hurry, their budding romance hits a new obstacle
that may throw them off course.

Rosener shared that he enjoyed playing Kevin since it afforded him the privilege to work with the Border Collies. “They are unbelievable animals,” he admitted. “I did grow up around them and I knew that they were extremely intelligent.”

“I hope the viewers get to marvel these days the same way that I did. Andrea is an incredible actress, person, mother, and professional. There are so many things I admire about this woman and I can’t wait for the fans to watch her and cheer her on,” he added.

“There is an increase in the content being made, which is fantastic,” he said. “There are so many interesting and new things going on but at the same time, there is no monoculture anymore, so because of that, there is no one thing that everyone is watching and talking about. Also, accessibility is great these days.”

Motivations as an actor

On his daily motivations as an actor, Rosner said, “Finding new things to try. I got into acting because I didn’t know what I wanted to do for a living. Acting allowed me the opportunity to try everything, I have played everything from a tow truck driver to a mayor to a cowboy to a pilot to a rescue shelter retreat owner. I guess I am a jack of all trades, master of none.”

For young and aspiring actors, Rosner said, “Learn how to play what you look like really well, and then, find out what you want to do.”

He acknowledged that there have been many moments in his career that have helped define him. “I am hoping that the biggest ones are around the corner in the future,” he said. “I remember the first paid gig that I got, which was a small commercial, which is super-embarrassing now, but back then, I was over the moon to get it.”

“I also remember when I was a guest star on ‘Supernatural’ on The CW, and that was huge for me. It made me feel like I belonged since I worked with the rest of the cast,” he said.

“Then, I remember when I was a recurring character and the first time I had the lead role in a movie, so those were touchstones for me,” he added.

Life during the quarantine and its silver lining

“Quarantine was a time to develop a lot of projects,” he said. “It helped open other doors, which I am grateful for. I was able to write some projects and other things.”

He noted that the quarantine was a reflective time for people. “Everything came to a halt and everyone was forced to look around at their lives, and assess what was important to them,” he said.

“Over the last two years, I have stepped more into producing films. Those are skills that I have been working on heavily,” he added.

If he weren’t in the acting and entertainment world, he revealed that he would have been a sports agent or scuba diving instructor. “I love scuba diving,” he said.

On the title of the current chapter of his life, Rosner responded, “Taking Control.”

Rosner defined the word success as “supporting the physical necessities of your life with your artistic passion.”