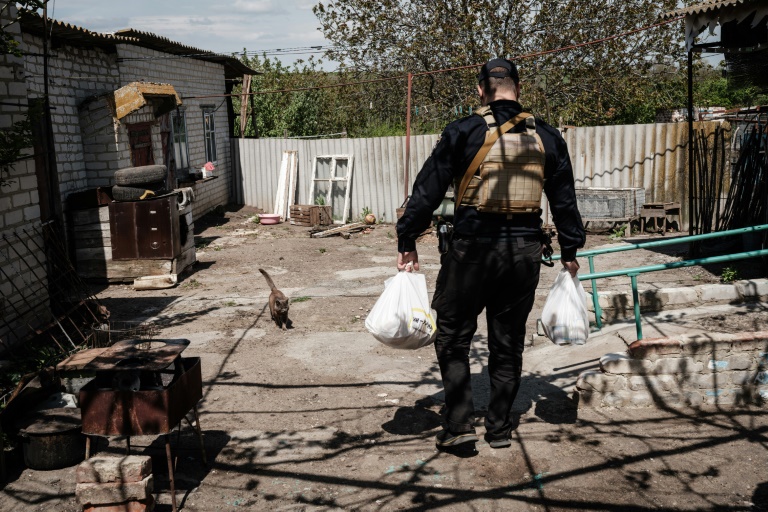 The pudgy Ukrainian policeman taking pasta and bread to villagers trapped under bombs on the eastern front sometimes feels like he is entering enemy territory.

Vladyslav Kopatskiy pulls the groceries from the back of his car and casts a quick glance at the horizon for signs of smoke from incoming Russian shells.

He then enters homes where his humanitarian mission is often greeted with misgivings — or worse.

Many residents of this frontline village of Novomykolaivka and other areas of Ukraine’s war-torn east are believed to back the Russians.

And others who were brought up with Soviet propaganda — often older people — simply have a deeply-engrained mistrust of any Ukrainian in authority, which can be particularly dangerous in places near the front.

The 24-year-old lists cases of locals arrested on suspicion of giving away coordinates of Ukrainian missile systems and rear bases that then come under Russian attack.

“Unfortunately, this happens,” he said after coming out of a hut where a family has spent the past three days hiding in a makeshift cellar from Russian shellfire and bombing raids.

“We try to talk to them, explain things to them, but people who have a Soviet upbringing are not easy to convince. They have one point of view and they stick to it.”

That view — instilled through Kremlin propaganda that portrays Ukrainians as neo-Nazis who take orders from Washington — makes Kopatskiy into a potential target in such frontline villages.

Soldiers who come in closest contact with Ukrainians still clinging onto their homes in the war zone estimate that between 30 and 45 percent support the invading Russians.

“They give the Russians our coordinates. That is certain,” a soldier who uses the nom de guerre Zastava said during a brief break from five days of hard battle at the front.

“I remember one old man came to check us out and then we were immediately hit,” he told AFP. Fortunately everyone survived.

“The older ones — they do not want to support us.”

The Donbas war zone is heavily populated by Russian speakers who can trace their roots back to families sent in by the Kremlin to dilute Ukraine’s nationalist strains after World War II.

They live side-by-side with Ukrainian speakers with older ties to the region — and a longer memory of Kremlin repressions dating back to the times of Joseph Stalin.

– ‘I blame both governments’ –

The wheelchair-bound 48-year-old has spent the past week listening in the dark to screaming war planes and bursting shells scattering shrapnel across surrounding farms.

His shed was destroyed and his level of anger at both Moscow and Kyiv for failing to negotiate a truce has ratcheted up another notch.

The air in his wooden house feels heavy because all the windows have been shuttered for weeks to limit the dangers posed by exploding glass.

“The Russians have now pulled back from Kyiv so to the people there the war feels like it is over,” Oleynik fumed.

“If the people in Kyiv were still experiencing what we are experiencing here, everything would be different. I blame both governments, both sides. We don’t matter to them.”

Part of the anger at Kyiv stems from the trapped families’ financial destitution.

Ukraine has remained one of Europe’s poorest countries throughout its post-Soviet existence.

And the war is now being fought across regions whose fragile economies were devastated by a Russian-backed insurgency that followed Ukraine’s 2014 pro-EU revolt.

Oleynik and his wife Yelena tried to move with their son to a nearby town after pooling all their savings and buying the neighbour’s beaten-up car.

But that town was hit by a wave a missile strikes four days after their arrival.

One policeman watching stone-faced families return with their belongings to towns booming with the thuds of shellfire could barely hold back his tears.

“They are going back into this hell because they have nowhere else to go,” he said, on condition his name not be used for personal security reasons.

“I tell them not to go back in and they say they have nowhere else to go. They say if it kills them, it kills them.”