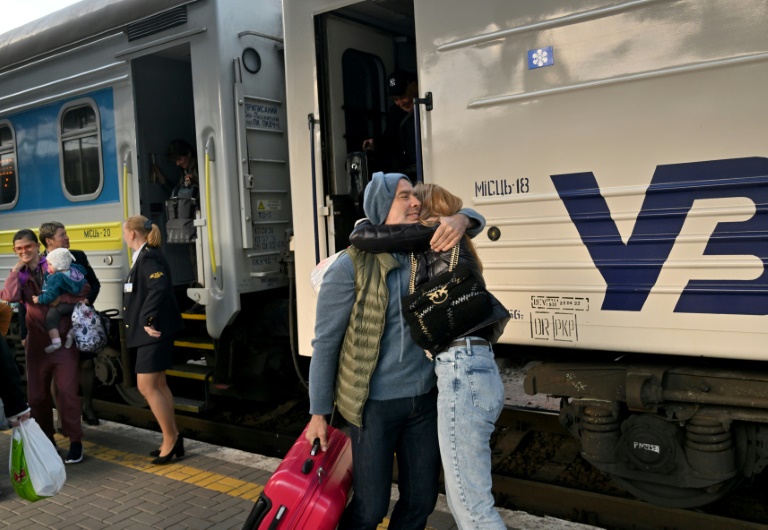 More Ukrainians returned to the country this week than left, for the first time since the start of the war – Copyright AFP ABBAS MOMANI

Teenager Maria Pshenychna embraces her father, Yuriy, as she descends from a train from Poland at a Kyiv station, returning home after fleeing the Russian invasion two months ago.

The 16-year-old had tears running down her face, clutching a single suitcase.

She had fled Gostomel, one of the Kyiv suburbs that saw intense fighting at the start of Russia’s attack launched on February 24.

“I’m so happy to be here,” she told AFP on the platform where she was reunited with her father.

“I am really thankful to the people abroad who helped us but I missed home because my mum is there with my dog.”

Another returnee, a woman in her 30s who refused to be named, told AFP that she had cried when her train crossed into Ukraine.

“You need to get used to living with war,” she said, returning to Ukraine after two months in Poland to rejoin her fiance.

“In Europe, it is good but my life is in Ukraine,” she said.

She admitted that she had no idea what the immediate future would hold but believed that peace will only return to Ukraine “when (Russian President Vladimir) Putin dies”.

The pair were just some of thousands of women and children who fled the Ukrainian capital at the start of the Russian invasion who are now heading back, despite the uncertainties.

While Ukraine has seen 5.9 million departures compared to 1.5 million returns, the number of those coming back — for the first time since the war began — exceeded those leaving this week.

Official border figures released on May 10 showed 29,000 crossed the frontier to leave while 34,000 crossed to go back.

So far, nearly two-thirds of the capital’s 3.5 million inhabitants have returned, Mayor Vitali Klitschko said on Tuesday, reviving a city that emptied in the first days of the Russian invasion.

Men under 60 were banned from leaving Ukraine, meaning the vast majority of refugees were women and children.

At the station in Kyiv, Roman — a 22-year-old civilian-turned-soldier who was not allowed to give his surname — was impatiently waiting for the train, holding a bouquet of flowers to give to his wife.

“We’re a little bit scared but it’s better this way,” he said.

Slightly further away, another man with flowers in hand is pacing incessantly.

The train pulls in and cheers of joy erupt.

Couples hug and kiss, children throw themselves into their fathers’ arms.

The emotional reunions are often noisy, but sometimes more discreet, with tears.

“We are getting used to the war, to the threat. The fear that we have now is different than it was two months ago,” explains 27-year-old Dana Pervalska, standing next to her.

“It’s calmer, with no air strikes or shelling. It’s much better now than in March,” says Natalia, who fled Kyiv for Lithuania with her six-year-old son Maxim and 14-month-old toddler.

“Home is home. We are Ukrainian,” she shrugs, her toddler’s pushchair decorated with ribbons of blue and yellow, the colours of the Ukrainian flag.

After two months with relatives in Lviv in western Ukraine, Olena Shalimova also decided to go back to Kyiv which she had left after an explosion close to her home.

“Time has passed, we have accepted this terrible reality, we can coexist with it,” she said.

– Almost back to normal –

And in Kyiv, life seems to have returned to some semblance of normality.

Most checkpoints have disappeared, shops have reopened and supermarkets are well stocked.

But the situation remains fragile with a nightly curfew between 10:00 pm and 5:00 am and parts of the economy at a standstill.

“I was working in a travel agency and at a cinema so I lost all opportunities to earn money. My main task is to find a job,” says Shalimova.

“Patriotism is not about staying at home, but about being where you will be most effective and able to help your country.”

Despite the influx of returnees, many people can still be seen leaving at Kyiv’s train station, very aware that the conflict is far from over and fearful that the fighting may resume around the capital.

Among them is Katerina Okhrymenko, 37, who has finally decided to leave for Germany with her 11-year-old son Lukas.

But for her, leaving is a huge unknown — she doesn’t have any relatives there nor any resources.

“I think our country will win.”

For her, the tears are tears of sadness.