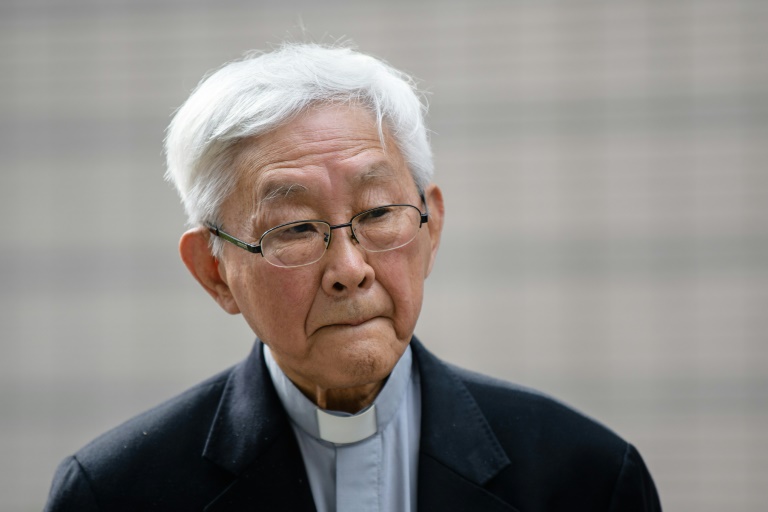 A Catholic cardinal critical of Beijing was released on bail by Hong Kong authorities, local media reported late Wednesday, as his arrest under the city’s national security law prompted US demands that he be freed.

Retired cardinal Joseph Zen, 90, was seen in media footage waving to reporters as he left a police station in the city hours after his arrest, but he did not give a statement.

He was released shortly before the White House issued a statement demanding he be freed “immediately”, and as the Vatican voiced “concern” at his arrest and said it was following the situation “very closely”.

Cantonese pop singer Denise Ho, who was also among a group of veteran democracy advocates arrested under the law, was similarly released on bail, local media said.

Those arrested were all trustees of a now-disbanded fund that helped finance demonstrators detained during massive democracy protests that swept Hong Kong three years ago.

Police said in a statement on Wednesday that two men and two women, aged between 45 and 90, had been detained for conspiring to collude with foreign forces to endanger national security.

They will all be granted bail but their travel documents will be confiscated, police added.

Zen is a former bishop of Hong Kong and one of the most senior Catholic clerics in the Chinese business hub.

He has been critical of the Vatican’s decision to reach a compromise with China over the appointment of bishops on the mainland and an advocate of Hong Kong’s democracy movement.

Ho is a popular local vocalist and an outspoken advocate for LGBTQ rights.

Police said those arrested were trustees of the “612 Humanitarian Relief Fund”, which helped arrested protesters pay their legal and medical bills.

Those arrested were suspected of endangering national security because they allegedly asked foreign nations or overseas organisations to impose sanctions on Hong Kong, police said.

On Tuesday, scholar Hui became the first among the group to be arrested as he tried to leave via the airport to take up an academic post in Europe.

The offence of “foreign collusion” was introduced in a sweeping national security law that Beijing imposed on Hong Kong in response to the democracy protests.

The security law has crushed dissent in the once outspoken business hub and can carry up to life in jail.

One of the group’s trustee, democracy activist Cyd Ho, has already been jailed for unauthorised assembly in a separate case.

The fund disbanded last year after the city’s national security police demanded it hand over operational details including information about its donors and beneficiaries.

In its Wednesday statement, police said it was also seeking to charge the trustees and an additional person for failing to properly register the group in accordance with law.

Shortly before the fund closed in October, Hong Kong’s Lingnan University said its contract with Hui had ended but declined to state a reason on privacy grounds.

Academics who played prominent roles in Hong Kong’s now decimated democracy movement have often found themselves dropped by universities and are struggling to find work.

A social commentator and prolific author, Hui taught for more than two decades at Lingnan University and was credited by former student leader Nathan Law with inspiring his political career.