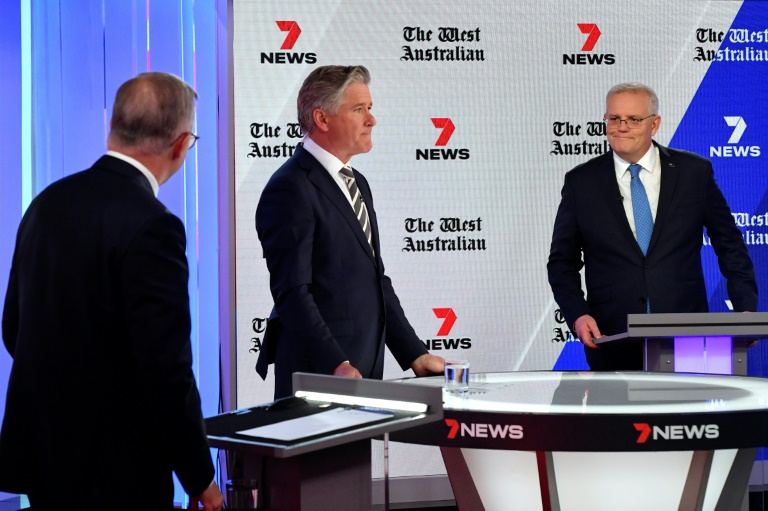 Ahead of the May 21 federal election, Australian Prime Minister Scott Morrison (R) and opposition leader Anthony Albanese have sparred on a number of policy issues including climate change – Copyright POOL/AFP MICK TSIKAS

Australian Prime Minister Scott Morrison derided his Labor Party opponent Wednesday as an unreliable “loose unit” on the economy as he fought to catch up in the opinion polls 10 days from the federal election on May 21.

In their third televised election debate, characterised as the “final showdown” before 17 million Australians cast their compulsory votes, Morrison and Labor’s Anthony Albanese got personal.

At the outset of the campaign last month, Albanese forgot both the unemployment rate and the main lending rate. More recently, he apparently had difficulty explaining his party’s disability policy.

“He’s a loose unit when it comes to the economy. He makes things up as he goes along,” said Morrison using a slang term for someone who is unreliable.

Albanese hit back, accusing Morrison of shirking responsibility for the slow rollout of vaccines and rapid antigen tests in the Covid-19 pandemic, for his management of the 2019-2020 “Black Summer” bushfires, and this year’s deadly east coast floods.

“Whenever this prime minister is confronted with any challenges, he blames the states, blames someone else consistently,” he said.

The prime minister has vowed to mine and export coal for as long as there are buyers, touted a “gas-fired recovery” from the pandemic, and resisted global calls to cut carbon emissions faster by 2030.

“Climate change is real and it is here now. We see it with the bushfires and floods,” Albanese told the Channel Seven-hosted debate.

“Australia can be a renewable energy superpower for the world if we seize this opportunity.”

The pair also sparred on a string of other policy disagreements: Morrison’s failure to fulfil a three-year-old campaign promise to create a federal anti-corruption commission; Albanese’s support for minimum wages to match inflation; and Labor’s support for more funding for childcare.

Despite the public wrangles, including in two previous election debates, the opinion polls have not budged much since Morrison called the election a month ago.

A weekend Newspoll gave Labor a 54-46 percent lead over Morrison’s ruling coalition on a two-party basis.

But few pundits are counting Morrison out.

Three years ago, he defied a string of negative opinion polls to win what he termed a “miracle” election.

Opinion polls in any case are a snapshot, not a prediction, cautioned Mark Kenny, professor at the Australian National University in Canberra.

But “if I put my money on it, I think I’ll probably go with what passes for empirical data that we do have at the moment, which suggests that Australians are in the mood to change the government: they’ve had enough of Morrison”, he told AFP.

On the campaign stump, Morrison freely concedes: “You may not like me.” He has pointed, however, to Australia’s post-pandemic economic resurgence and low unemployment rate.

Even on the economy, however, he has difficulties.

Inflation is running hot at a 20-year high as prices soar at gas stations, in shops, and for housing.