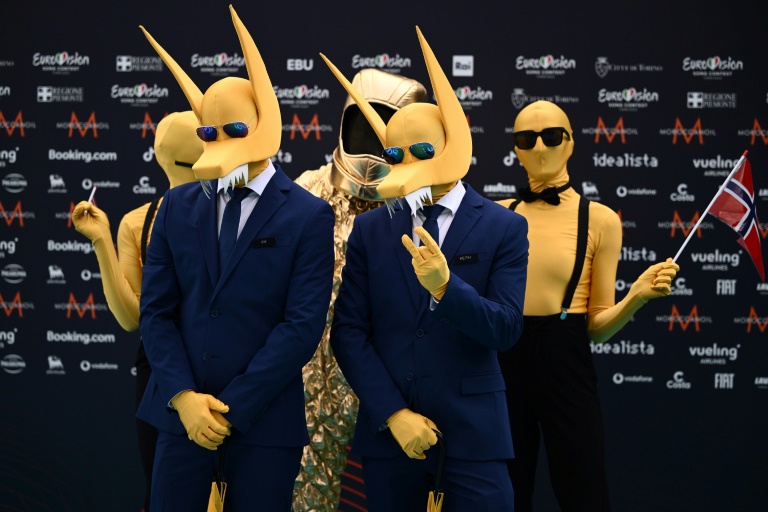 Just in time, against a backdrop of war in Europe, comes Eurovision, the world’s biggest live music event with its quirky, camp celebration of culture and song.

Watched by millions, the song contest held this year in Italy’s northwestern city of Turin is providing a welcome moment of celebration and solidarity amid the geopolitical turmoil caused by Russia’s invasion of Ukraine.

With a first semi-final Tuesday night and a second on Thursday, the 40 competing countries will whittle down to 25 to battle in the finale Saturday.

Fans gathered outside the PalaOlimpico sporting arena Tuesday expressed cheer at the atmosphere of camaraderie.

“Because the value of Eurovision is Europe coming together and sharing this unique experience and sharing some music together.”

– Give That Wolf a Banana –

The European smorgasbord of musical kitsch and culture has enthralled the continent for decades, serving up a steady supply of no-holds-barred belting, flamboyant costumes, onstage pyrotechnics and awkward presenter banter in heavily accented English.

In its 66th year — 2020’s edition was cancelled because of coronavirus — the cultural mash-up is camp and over-the-top, and often just outright odd.

This year appears to be no exception as seen by Norway’s Subwoolfer, who perform their upbeat “Give That Wolf a Banana” wearing cartoonish yellow wolf masks complete with white teeth, or Latvia’s entry “Eat Your Salad” by Citi Zeni with its naughty lyrics and planet-loving message.

Enjoying a flood of popular support and tipped by bookmakers to win the cult competition is Ukraine’s Kalush Orchestra, with the brisk rap lullaby “Stefania”.

The song addressed to a mother, which mixes hip-hop and traditional Ukrainian music, was written before Russia’s February invasion of Ukraine.

But with striking lyrics such as “I’ll always find my way home even if all the roads are destroyed”, the song has become “really close to the hearts of many Ukrainians”, said frontman rapper Oleh Psiuk, who along with the band received special government authorisation to attend Eurovision.

“They are authentic, original and really unique, and this is what we want to showcase.”

Although watched by viewers of all ages, the competition sometimes verges on the provocative.

Sheldon Riley of Australia — one of the handful of non-European countries to compete — showed off a voluminous white ostrich feather cape worthy of Liberace, while Moldova’s Zdob si Zdub &amp; Advahov Brothers have brought a high-octane dose of energy with their accordion and fiddle-laden “Trenuletul”.

Meanwhile, the UK’s long-haired, ever-grinning Sam Ryder is giving Brits a long overdue whiff of possible victory with his entry “Space Man”, after a quarter of a century of disappointment.

The European Broadcasting Union, which organises Eurovision, excluded Russia from the show on February 25, the day after its invasion.

During the official kickoff, performers walked the turquoise carpet runway flanked by press from corresponding nations.

Votes are cast by music industry professionals and the public from each country. Out of fairness, nobody can vote for their own nation.