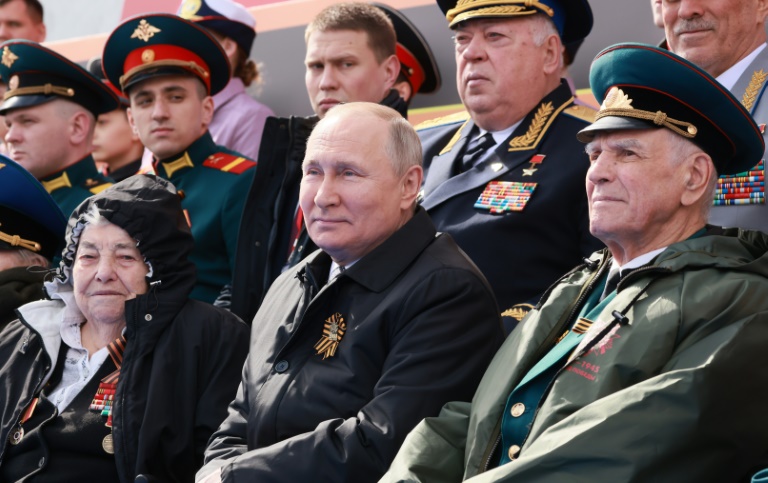 Russian President Vladimir Putin delivers his highly anticipated Victory Day speech at a giant military parade in Moscow. He says he had no choice but to send troops into Ukraine to defend the Russian “Motherland” from an “absolutely unacceptable threat”.

Speculation that he could use the 77th anniversary of the Soviet victory over Nazi Germany in World War II to expand the conflict comes to naught.

The Russian leader insists instead on the need to avoid “the horror of a global war”.

A giant black and orange ribbon is carried through the devastated port city of Mariupol by pro-Russian separatists to mark Victory Day.

In late April, after besieging the strategic city for several weeks, Moscow said it had taken control of the city, except for the huge Azovstal steel plant where the remaining Ukrainian forces are holed up.

The Kremlin said last week there were no Victory Day celebrations planned in the battered city.

Ukraine’s President Volodymyr Zelensky says he will not allow the Soviet Union’s victory over the Nazis to be “appropriated” by Putin.

“We are proud of our ancestors who together with other nations in the anti-Hitler coalition defeated Nazism. And we will not allow anyone to annex this victory. We will not allow it to be appropriated,” he says.

He compares the Russian invasion to the Nazi occupation of parts of present-day Ukraine, vowing, “We won then. We will win now.”

As Russia tries to take the Russian-speaking Donbas region in the east, the governor of Lugansk region, Sergiy Gaiday, says there are “very serious battles” around Bilogorivka and Rubizhne.

Donbas encompasses Lugansk and the neighbouring region of Donetsk.

Von der Leyen says the EU will give its opinion on Ukraine’s membership bid next month but French President Emmanuel Macron appears to rule out the prospect of the country joining the club in the near future.

Macron, whose country currently holds the rotating EU presidency, says joining the bloc would take “decades” and suggests instead that Ukraine and other EU hopefuls like Moldova and Georgia be integrated into a new, yet-to-be-created “European political community”.

The UN Human Rights Council announces it will convene a special session on Thursday to address alleged worsening Russian violations in its war in Ukraine.

More than 50 countries back Kyiv’s request for an extraordinary meeting of the UN’s top rights body to examine “the deteriorating human rights situation in Ukraine stemming from the Russian aggression”.

European Council President Charles Michel says Russia will fail to “execute” Ukraine’s “freedom” on a surprise trip to Odessa during which he is forced to take cover when missiles again strike the Black Sea city.