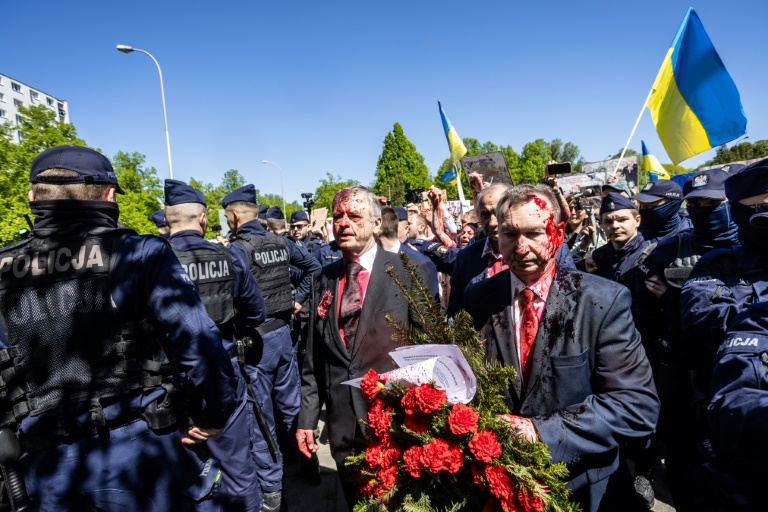 The Russian ambassador to Poland was splattered with a red substance by pro-Ukraine activists in Warsaw on Monday when he tried to lay a wreath to mark Victory Day.

Victory Day is celebrated annually on May 9 to commemorate the Soviet defeat of Nazi Germany in World War II. This year’s events are taking place as Moscow’s military campaign in Ukraine enters its third month.

“In Warsaw, during the laying of a wreath at the cemetery of Soviet soldiers, an attack was carried out on the Russian ambassador to Poland, Sergei Andreev, and the Russian diplomats accompanying him,” Russian foreign ministry spokeswoman Maria Zakharova said on Telegram.

“The admirers of neo-Nazism have again shown their faces,” she said, repeating Russia’s assertion that it is fighting neo-Nazis in Ukraine.

Chanting “fascists” and brandishing the national flag, pro-Ukraine activists blocked the ambassador’s way as he walked toward the mausoleum, preventing him from laying his wreath, according to an AFP photographer at the scene.

Several individuals then threw a red substance on his face and clothes, and also splattered some of the men in his entourage.

After wiping his face with his hand, Andreev said “I am proud of my country and my president”.

Andreev told Russian news agency RIA Novosti that he was not seriously harmed in the attack, adding that the red substance was some sort of syrup.

The Russian embassy had planned to hold an official ceremony at the site but cancelled after a negative response from Warsaw’s mayor and the foreign ministry.

But Andreev still showed up with his wreath, as did individual Russians throughout the morning, while pro-Ukrainian protesters held up a big sign that said “criminals” and displayed photos of the war-torn country.

Polish Interior Minister Mariusz Kaminski said after the incident that “Polish authorities did not recommend that the Russian ambassador lay flowers on May 9 in Warsaw”.

“The police made it possible for the ambassador to drive away safely,” he added.

Kaminski also tweeted that the activists had gathered there legally to protest “Russian aggression in Ukraine, where every day the crime of genocide takes place.”

“The emotions of the Ukrainian women — who took part in the demonstration and whose husbands are courageously fighting to defend their homeland — are understandable,” he added.

Russia’s foreign ministry said it had protested to Polish officials “their indulgence of young neo-Nazis”.

“Russia has demanded that Poland organise without delay the wreath-laying ceremony while providing complete security in the face of all sorts of provocations,” it said in a statement.

Poland has accepted hundreds of thousands of refugees from neighbouring Ukraine since Moscow sent troops into the country on February 24.