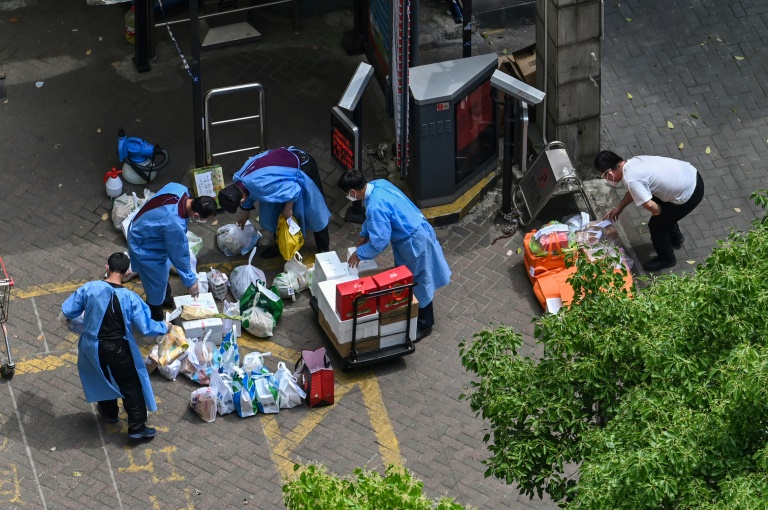 Frankfurt, London and Paris each shed more than one percent nearing the half-way stage after Tokyo closed down 2.5 percent.

On Wall Street, all three major indices fell by more than one percent at the start of trading.

Shanghai edged higher and Hong Kong was shut for a holiday.

Oil prices lost two percent on demand worries and the haven dollar rose, while bitcoin plunged to a 2022 low below $33,000 as investors shunned the volatile cryptocurrency.

Stock markets had dived last week after the Federal Reserve ramped up interest rates by a half-percentage point and flagged more hikes to tackle decades-high inflation.

“Meanwhile, inflation concerns continue to be exacerbated by the war in Ukraine and ongoing supply chain challenges,” they added.

“Anxiety is stemming from the Fed’s next moves, with uncertainty creeping in about the scale and speed of interest rate hikes,” said Hargreaves Lansdown analyst Sophie Lund-Yates.

“All this comes at the same time as China grapples with ongoing lockdowns and the prevailing economic storm these entail.”

Millions of people in Beijing stayed home on Monday as China’s capital tries to fend off a Covid-19 outbreak with creeping restrictions on movement.

Beijing residents fear they may soon find themselves in the grip of the same draconian measures that have trapped most of Shanghai’s 25 million people at home for weeks.

Lockdowns across dozens of Chinese cities — from the manufacturing hubs of Shenzhen and Shanghai to the breadbasket of Jilin — have wreaked havoc on supply chains over recent months and further stoked global inflationary pressures.

Investors were given more bad news on Monday as China’s April exports slumped to their lowest level in almost two years, due to the nation’s strict zero-Covid policy.

Exports plunged to 3.9 percent on-year, while imports were stagnant for April.

Global markets have also taken a beating this year from Russia’s invasion of Ukraine.

President Vladimir Putin on Monday defended Russia’s offensive in Ukraine and blamed Kyiv and the West, as he looked to use grand Victory Day celebrations to mobilise patriotic support for the campaign.

However, investors were relieved that Putin made no major announcements, despite reports he could use the anniversary to announce an escalation of the conflict or a general mobilisation.

“Putin has not declared a war on Ukraine to enable full mobilisation which is obviously a relief,” noted Markets.com analyst Neil Wilson.