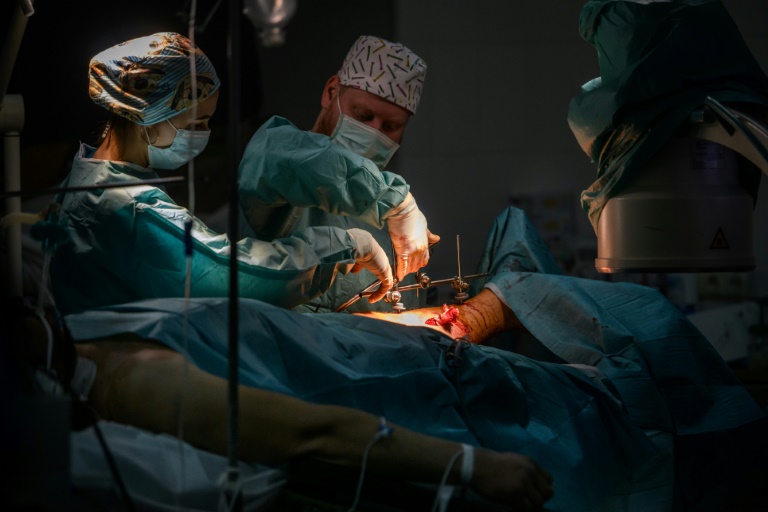 At the military hospital in Zaporizhzhia, surgeons have been working around the clock to tend those wounded in the war – Copyright POOL/AFP Anthony Kwan

For more than two months, Dr Farad Ali-Shakh has spent his waking hours tending wounded Ukrainian soldiers and civilians. He also treats injured Russians, albeit reluctantly, who could be part of future prisoner exchanges.

This young doctor says he “practically lives” at the military hospital in Zaporizhzhia, a large city in southern Ukraine which lies just a few dozen kilometres from the front.

At night, the distant thud of shelling can sometimes be heard here.

Since Russia largely withdrew from northern Ukraine to refocus on the eastern Donbas region and the south, this industrial city has become a rallying point for those fleeing the violence or wounded in war.

Ali-Shakh says he works 20 hours every day, which can mean operating on up to 20 patients, one after the other.

Since the Russian invasion on February 24, thick tarpaulins have been hung up in front of the hospital’s windows to make it less visible from the skies at night when it could become a target for Russian forces.

But the tarpaulins are also there to protect people from flying glass in the event of a bombing after the first houses in Zaporizhzhia were hit in a Russian strike last week.

It means the hospital is largely in darkness most of the time, even during the day. Conversations take place by the light of a desk lamp and patients’ X-rays give off a ghostly hue.

And the scant light makes the photos on the doctor’s mobile look even more grisly.

One photo shows an almost totally severed leg, which is only attached by a piece of skin.

“That’s something we see a lot here,” Ali-Shakh says. “We were able to reconnect the blood vessels then reattach the skin.”

Another shows a patient whose arm was almost cut in two, which was also saved, he explains soberly.

Asked about the emotional impact of constantly dealing with such horrific wounds, he shrugs.

“We have learnt to deal with such injuries. We are doing a difficult job but we’re helping our country,” he says before volunteering another surprising piece of information.

“We even treat Russian soldiers. But maybe we shouldn’t. Maybe we should just leave them so they can fertilise our land.”

When it comes to treating enemy soldiers, the young doctor admits to feeling a certain “lack of motivation”.

“But if you help them recover, you can exchange them for Ukrainian soldiers” held captive by the Russians, he says.

Throughout the hospital, boxes of clothing and medical supplies give a sense of the ongoing emergency at the hospital.

But they are also an indication of the limited resources the surgeons must use to treat these “animals”, sighs Major Viktor Pyssanko, who runs the hospital.

The Russian soldiers “are thoughtless youngsters” who are fed to the back teeth on “propaganda”, he says.

They say they want to free Ukraine but “they want to kill as many Ukrainians as possible”.

Even so, the hospital is trying to save as many as possible with the sole aim of “swapping them for our own soldiers”, Pyssanko explains.

Several prisoner exchanges have taken place since the Russian invasion began, the most high profile of which involved the mayor of the southern city of Melitopol, who was captured on March 11 then freed a few days later.

The latest prisoner exchange was on Friday, when 41 Ukrainians — 28 soldiers and 13 civilians — were freed, among them 11 women and a cleric. Kyiv never says how many Russians were handed back to Moscow.

They stayed for three weeks, under constant guard, and were then handed to the Ukrainian security forces at the end of April, recalls Vasily, a doctor at the hospital who did not want to give his surname.

Vasily doesn’t know what happened to them afterwards.

“They looked very depressed, devastated, not aggressive. Scared,” he said.

“Because of that, we… never felt the need to express contempt” for them.

Between the doctors, where black humour is very common, “we joked about harming them. But it all ended when it came to performing and keeping our Hippocratic Oath,” Vasily said.

“Yes, those are our enemies… (but) I never felt a desire to strangle” them in their beds, he said.

“If I did have those kinds of thoughts I wouldn’t be working as a doctor.”