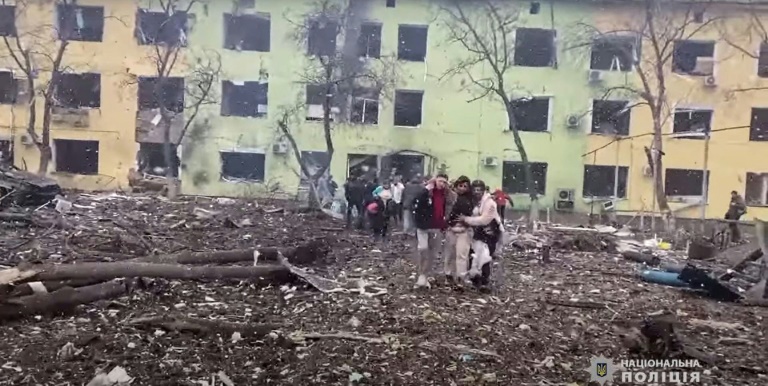 People are helped out of a damaged children’s hospital following a Russian strike in Mariupol, dubbed a war crime by the West – Copyright National Police of Ukraine/AFP/File Handout

Key developments in the siege of the strategic Ukrainian port of Mariupol where Russia has been seeking to conquer the last pocket of resistance holed up in a sprawling steelworks, after a rush to evacuate civilians trapped inside.

Located on the Sea of Azov, the city has been a key prize for Russia in its bid to join up the annexed Crimea peninsula to the west with territory held by pro-Russian rebels in the east.

On March 2, a week after the Russian invasion of Ukraine, Moscow’s artillery begins pounding Mariupol, a predominantly Russian-speaking city of 441,000 inhabitants some 55 kilometres (35 miles) from the Russian border and 85 kilometres from the pro-Russian separatist stronghold of Donetsk.

The mayor accuses Russian forces and pro-Russian fighters of seeking to “impose a blockade” by cutting off food supplies and vital infrastructure, including water, electricity and heating.

On March 9, Russia targets a building housing a maternity ward and paediatric hospital in Mariupol, killing three, including a young girl.

Mid-March sees the start of the evacuation of thousands of civilians from the city through a humanitarian corridor.

Earlier evacuation attempts had collapsed with both sides accusing the other of failing to halt fire.

Moscow denies the attack, blaming Ukraine’s far-right Azov battalion, which is based in the city.

On March 21, Kyiv rejects a first Russian ultimatum to Ukrainian forces in the city to surrender.

Civilians who manage to escape in their own vehicles describe a “freezing hellscape riddled with dead bodies and destroyed buildings”, Human Rights Watch says.

On March 30, Moscow announces a ceasefire to allow the evacuation of civilians from Mariupol to the Ukrainian-controlled city of Zaporizhzhia.

On April 4, Mariupol mayor Vadym Boychenko says the city has been “90 percent” destroyed.

On April 7, the new “mayor” of Mariupol, Konstantin Ivashchenko, installed by pro-Russian forces, says that around 5,000 civilians have died.

On April 11, marines in Mariupol say they are preparing for a “last battle”, with fighting concentrated at the Azovstal steelworks after separatists say they seized the port.

The next day, the regional authorities say at least 20,000 people have been killed.

The United States says it has “credible information” that Russia may use “chemical agents” in its offensive.

Over the following week, Russia issues a string of ultimatums to troops holed up at the steelworks to give themselves up but they refuse.

On April 20, Ukraine proposes special negotiations on the fate of Mariupol, where hundreds of civilians are also sheltering alongside troops in the steelworks.

On April 21, Russian President Vladimir Putin declares the “liberation” of Mariupol to be a “success.” He orders the Russian military to refrain from storming the Azovstal plant, telling them to besiege it instead, “so that not even a fly can escape.”

On May 2, an initial group of around 100 civilians is evacuated from the plant, arriving in Zaporizhzhia.

On May 3, Russian forces launch a “powerful assault” on the plant using artillery and planes, according to Ukraine.

The next day, Russia announces its forces will cease fire at Azovstal and open a humanitarian corridor for civilian evacuations for three days. Ukrainian fighters say the assault continues.

On May 6, the Ukrainian presidency says almost 500 civilians have been evacuated in total, but the UN-led rescue operation is ongoing.

A day later, Kyiv says “all women, children and the elderly” have been extracted from the plant to safety.

It urges Doctors Without Borders (MSF) to evacuate its soldiers from the steel plant, adding those wounded are “dying because of gangrene and sepsis” without medicine.