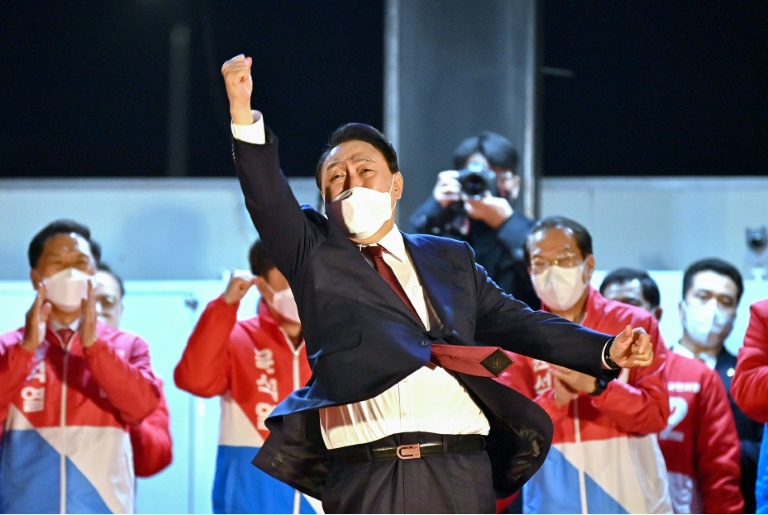 South Korea’s hawkish new president will be sworn in Tuesday, and he looks set to get tough with Pyongyang, departing from what he has called the “subservient” approach of his predecessor.

For the past five years, Seoul has pursued a policy of engagement with North Korea, brokering summits between Kim Jong Un and then-US president Donald Trump while reducing joint US military drills Pyongyang sees as provocative.

But talks collapsed in 2019 and have languished since, while the nuclear-armed North has dramatically ramped up weapons tests, conducting 14 so far this year, including the launch of its largest-ever intercontinental ballistic missile.

Unlike outgoing President Moon Jae-in, who saw North Korea as a negotiating partner, incoming leader Yoon Suk-yeol sees the country as an adversary, said Cheong Seong-chang of the Center for North Korea Studies at the Sejong Institute.

Yoon has pledged to officially define Pyongyang as South Korea’s “principal enemy”, Cheong added, and has not ruled out pre-emptive strikes on the North.

This hard-line stance appears to have already annoyed Pyongyang.

On Thursday, North Korean propaganda website Uriminzokkiri said Yoon was stirring up “confrontational madness” and it was “preposterous” for him to discuss pre-emptive strikes.

But Cheong warned of a rough ride ahead and said he expected no summits.

Instead of delicate diplomacy, Yoon wants the “complete and verifiable denuclearisation” of North Korea — something that is anathema to Kim, said Hong Min, a researcher at the Korea Institute for National Unification.

Calling for Kim to give up his nukes first is “too high a hurdle for the North to accept” and looks set to put a final nail in the coffin of Moon’s cherished programme of engagement, Hong told AFP.

Avowed anti-feminist Yoon won the election in March by the narrowest margin ever, and has since backed off some of his more explosive domestic campaign promises, chiefly his vow to abolish the Ministry of Gender Equality.

His firmer approach to North Korea, however, is already apparent: after Pyongyang test-fired a ballistic missile Wednesday, Yoon’s team called it a “provocation”.

On the campaign trail, Yoon called Kim a “rude boy” and told voters earlier this year: “If you give me a chance, I will teach him some manners.”

His language harks back to 2017’s “fire and fury” era, when Kim and Trump traded insults through Twitter and state media.

South Korean activists also claim to have restarted sending propaganda balloons across the border, something Moon banned during his term.

In addition to a record-breaking blitz of weapons tests, Kim said last month he would boost North Korea’s nuclear arsenal at the “fastest possible speed”.

“Pyongyang is signalling to the incoming administration in Seoul that resource constraints will not prevent it from waging a competitive arms build-up,” said Leif-Eric Easley, a professor at Ewha University in Seoul.

South Korea’s conventional capacity outstrips that of the North, and Yoon has called for more US military assets to be deployed in the South, a topic likely to be on the agenda when US President Joe Biden visits Seoul later this month.

By timing weapons tests around Yoon’s inauguration and Biden’s visit, Kim could be hoping to pile on the pressure, said Mason Richey, associate professor of international politics at Hankuk University of Foreign Studies.

Kim may be aiming to “make Yoon’s hardline approach to North Korea harder to sell domestically”, he added.