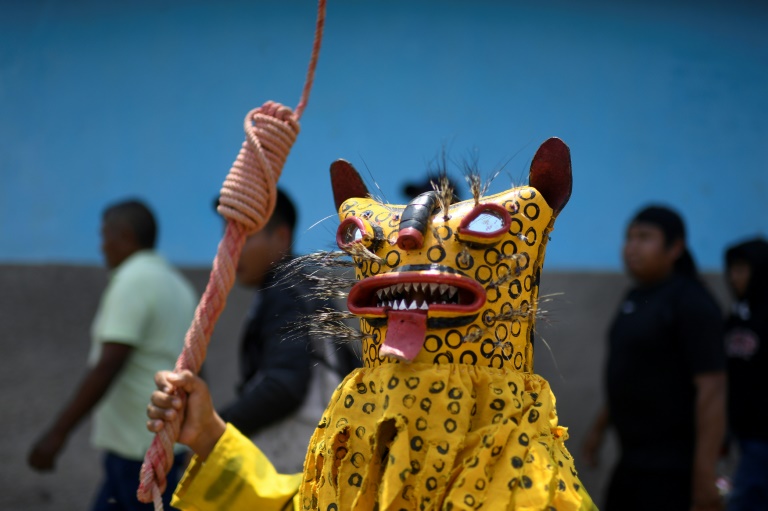 Seeking to appease the god of storms and end a drought, men and women in tiger costumes whip each other mercilessly into submission in an ancient ritual in southern Mexico.

“They say it’s a drop of blood for a drop of rain,” Karina Vicente says as she prepares to take part in the annual tradition for the first time.

“I’m very excited but nervous,” the 22-year-old psychology student tells AFP in the town of Zitlala in Guerrero, one of Mexico’s poorest and most violent states.

In the past, the 300-year-old indigenous ceremony to bring rain and plentiful harvests was only for men.

But these days, women also want to help keep the three-century-old tradition alive, even if the lashes do hurt, Vicente says.

According to tradition, blood spilled in the May 5 ritual, called Atsatsilistli, is an offering for the rain god Tlaloc.

The sound of each whiplash represents a clap of thunder, the yellow color of the costumes a drought and the whip a tiger’s tail.

Before the fight begins, the residents of Zitlala split into two groups and dance under the intense sun along steep streets, to the rhythm of banda, a type of Mexican music.

First, the male contestants enter the battleground — the town’s basketball court — to fight for about five minutes at a time, watched by crowds of spectators.

“Come on! Come on!” a burly, bare-chested man says, challenging his opponent.

Minutes later, he raises his arms in victory, blood starting to seep from the wounds inflicted by his rival.

Referees stand by ready to separate the fighters if they break the rules.

The musicians of both sides play simultaneously, adding to a chaotic atmosphere.

Soon the air is filled with the aroma of mezcal, an agave spirit that the contestants drink and use to wet their whips to make them more effective.

Three hours later, it is the women’s turn. They greet and hug each other before and after the fight, unlike the men.

Within minutes, Vicente’s opponent removes her mask in defeat after some well-aimed lashes.

The ritual ensures the rainy season begins punctually — a lifeline for a community that relies on corn and other crops, says resident Cleofas Cojito, 60.

She welcomes the participation of women in the tradition, which was once so brutal that some contestants even died, Cojito says.

“Now there’s equality. There isn’t so much machismo anymore,” she adds.

The next day, Vicente feels sore, but motivated.

“I’ll fight again. We have to look after what we’ve already won,” she says with a smile.