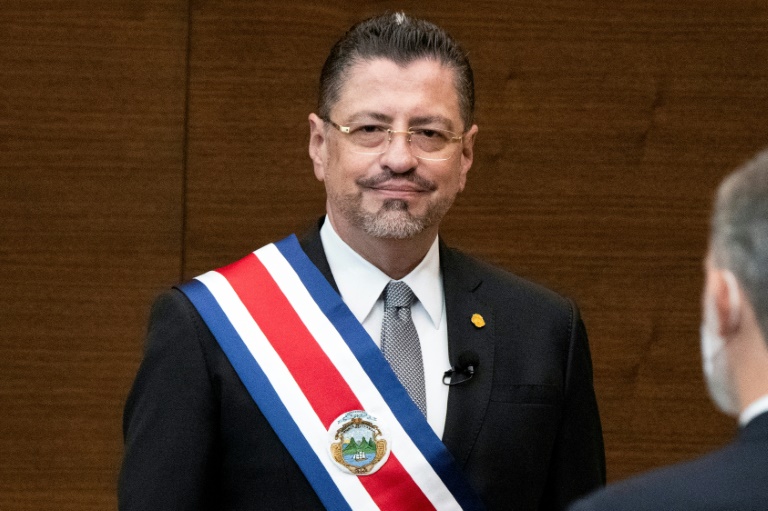 Costa Rica’s new president Rodrigo Chaves, elected despite a cloud of sexual harassment allegations, took the oath of office Sunday with promises to revive the economy and end the abuse of women in his country.

As feminist organizations protested nearby, the right-wing economist said the “first political commitment” of his four-year term would be to stamp out gender discrimination and harassment.

“We will not tolerate the harassment they (women) suffer every day and in all areas of society,” he told congress after being sworn in to lead one of Latin America’s most stable democracies.

“It cannot be that our women are afraid to walk alone on the street, feel afraid in their own home, at work, in a park, at a concert.”

Chaves, 60, was investigated over sexual harassment complaints brought by women while he was a senior official at the World Bank, where he worked for 30 years.

He was demoted over the claims, and later resigned.

Dozens of women protested Sunday near the seat of congress against gender violence and unequal pay in a country where abortion is allowed only if the woman’s life is in danger.

“We are telling the country and the president-elect that we are here. That we will be vigilant,” Sharo Rosales of the Women in Action movement told local media.

Chaves takes over an economy in decline, with rising foreign debt — about 70 percent of GDP — a poverty rate of 23 percent, unemployment of nearly 14 percent, and public sector corruption.

Vowing to “repair the country,” he said: “We will not just clean house. We will rebuild it!”

Tourism, one of the country’s main economic drivers, was hard hit by the coronavirus pandemic, and the country of 5.2 million people experienced an increase in unemployment equaled in the region only by Peru.

“If the political class fails once more, our country could fall apart,” Chaves said.

He has previously vowed to improve the terms of an agreement Costa Rica’s reached with the IMF for a loan of more than $1.7 billion.

The economist, who served six months as finance minister in the outgoing government, won a runoff election over former president Jose Maria Figueres — himself tainted by a corruption scandal.

Chaves had been a surprise qualifier for the April 3 final race, having polled fourth ahead of February’s first round.

This week, Chaves said his government would not ratify the so-called Escazu Agreement that establishes protection for environmentalists, arguing it was unnecessary and would harm the economy.

Costa Rica, a regional leader in environmental protection, had hosted the signing of the agreement in 2018.

Chaves did not address environmental issues in his first public speech.

Shortly after his inaugural address, Chaves signed his first decrees, including scrapping obligatory mask-wearing for people other than front-line health workers, and compulsory coronavirus vaccination for the public sector.

Spanish King Felipe VI attended the ceremony at Congress in San Jose, along with other heads of state or government and delegations from nearly 100 countries.