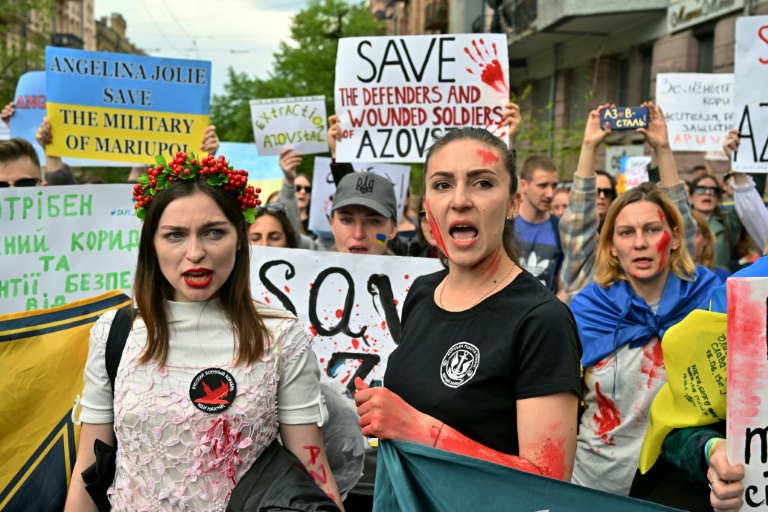 Relatives of Ukrainian troops holding out in the Azovstal plant rally in Kyiv on May 3, 2022 – Copyright AFP Sergei SUPINSKY

With supplies running low, amputations conducted in a ramshackle clinic, and corpses piling up, the fighters trapped at the besieged steel plant in Ukraine’s Mariupol are battling to hold on as Russian forces tighten their grip on the city’s last redoubt.

A smattering of Ukrainian units making their last stand are sheltering in the labyrinth of Soviet-era bunkers and tunnels snaking beneath the sprawling steelworks along with an untold number of wounded and dead combatants.

Details about the chaotic final defence and desperate efforts to tend to the wounded have been painstakingly pieced together by military medic Yevgenia Tytarenko, whose husband and colleagues remain trapped inside the factory.

“Lots of soldiers are in serious condition in the hospital. They are injured with no medicine. Food and water are running out,” said Tytarenko, who remains in regular contact with people inside the Azovstal plant.

“I’ll be standing until the end,” Tytarenko’s husband and medic Mykhailo texted to her on Friday, in a message shared with AFP.

For weeks, Russian forces have pounded the steelworks by land, air, and sea — while attempting to breach its defenses that have led to fierce firefights at the facility.

Commanders have issued their final goodbyes to loved ones as supplies dwindle and the Russians close in, while the possibility of extracting the fighters looks increasingly unlikely, said Tytarenko.

“Commanders have already said their farewells to their wives. One of them messaged his wife: ‘Don’t cry. We’ll be back home in any case — alive or dead’,” said Tytarenko.

Tytarenko described a chaotic and complex operation inside Azovstal with fighters battling the Russians while also shepherding civilians along with the bodies of those killed to different parts of the plant.

Without refrigeration, the bodies of the dead have been packed in plastic bags and are rotting, but the fighters remain committed to preventing them from falling into the hands of the Russian forces.

“Almost everywhere, they are carrying corpses with them,” said Tytarenko. “They deserve to be evacuated — those who are alive, injured, and dead.”

On Saturday, Ukrainian authorities said that the remaining women, children and elderly civilians had been evacuated from Azovstal, sparking fresh questions about what the future would hold for the fighters there.

Ukraine’s President Volodymyr Zelensky suggested on Friday that “diplomatic options” were being mulled to rescue the Ukrainian soldiers, but offered few details.

But for the families of Mariupol’s defenders, the war has unleashed a devastating toll, according to Tytarenko.

The 34-year-old fled Mariupol on February 24 as Russia launched its invasion into Ukraine and began shelling the port city near the border.

The attack came just two days after she married her husband Mykhailo, who pushed his pregnant wife to leave as the Russian military began to clobber Mariupol.

Her fellow medics stayed behind where they cobbled together the bare-bones field clinic inside the heavily fortified steel factory, after Russian forces targeted hospitals across Mariupol, according to Georgian national Daviti Suleimanashvili.

Like Tytarenko’s husband, Suleimanashvili is a member of the Azov regiment — a former far-right battalion turned National Guard unit renowned for the mettle of its fighters who are leading the defence of the steelworks.

Suleimanashvili said he was treated in the hospital in March after being hit by tank fire during a battle in Mariupol’s streets.

It was there that Suleimanashvili had his left leg amputated as doctors feverishly treated dozens of other wounded patients in the facility that lacked basic sanitation, medical equipment, and heating.

“It’s very hard to do any medical treatment there,” Suleimanashvili told AFP by phone. “Conditions there are zero.”

Suleimanashvili said he was among the lucky few who were evacuated from Mariupol by a trio of Ukrainian helicopters that made it past Russia’s air defences in late March.

At least two other attempts to airlift out the wounded were thwarted by Russian firepower, according to Suleimanashvili.

“It was a miracle, I only saw those kind of things in films,” Suleimanashvili said of his evacuation.

But for all the ongoing horror taking place at Azovstal, for some being on the outside is unbearable.

Rolana Bondarenko said dozens of her close friends and fellow Azov fighters are among the hundreds holding out at the plant.

Along with her son, the 54-year-old was one of the first members to join the Azov regiment when it was founded in 2014 following Russia’s annexation of Crimea and the outbreak of the Moscow-backed insurgency in Ukraine’s far east.

Bondarenko said her son is now one of the many bodies being moved inside Azovstal after he was killed in April.

“He’s laying in a black bag and rotting there. And it’s not only him, there are hundreds of others,” said Bondarenko by phone in Germany where she relocated last year for medical treatment.

But even after losing her son, Bondarenko said she presses on to support her fellow fighters who continue to push back against the Russians.

Everyday she sends texts and light-hearted emojis to her friends on the inside to help keep their spirits up, while they in turn have tried to shield Bondarenko from the hardships they face — insisting that the defenders’ fighting resolve remains strong.

Even still, many of the fighters in Azovstal have lost between 15 and 20 kilograms (33 and 44 pounds) in recent weeks with diminishing food stocks rationed among the military units, civilians, and wounded, according to Bondarenko.

“I’d like to be with them there now,” she said through sobs. “If I died there, it would be with my family.”