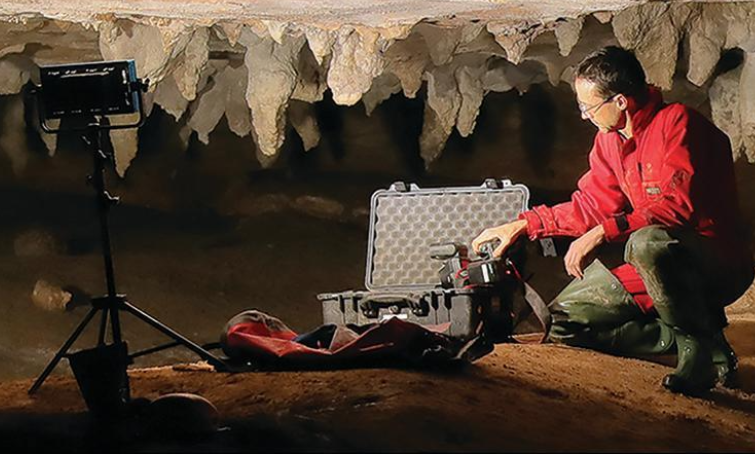 One of the researchers, photographer Stephen Alvarez, with scanning equipment in the cave in Alabama where the Native American carvings were found. The largest carvings are now almost invisible; they were discovered in a detailed three-dimensional photographic model of the cave ceiling.
Credit – Alan Cressler / Antiquity Journal

1,000 years ago, artists working by the light of burning reeds carved figures into the ceiling of a cave in what’s now Alabama, crouching in the narrow space below.

Over the hundreds of years that followed, mud that naturally forms on the cave walls covered the carvings, making them nearly invisible to the naked eye. The New York Times notes that ancient footprints are embedded in its remotest passage. The names of Union soldiers from the Civil War remain scrawled on a wall.

The cave, known as the 19th unnamed cave in Alabama, meanders over two miles under the northern part of the state. Although the entrance to the cave is large, the distance between the floor and the ceiling quickly narrows to between three or four feet in the cave’s so-called dark zones.

There is even a waterfall and a number of dark pools. The cave was discovered in the 1990s by Atlanta-based caver Alan Cressler, one of the co-authors of a new paper published Tuesday in the journal Antiquity.

It’s one of the thousands of caves within the southern part of the Appalachian Plateau, a huge region of “karst” — heavily eroded limestone — that runs from southern Pennsylvania to Alabama. And needless to say – but the actual location of the cave is a secret.

Using advanced photography and 3-D modeling, the researchers were able to reveal images that could not be perceived otherwise. This technique has been used before to create a replica of the art in the Lascaux caves in France.

The researchers also used a technique called photogrammetry, in which a camera inches along a track, taking overlapping images that are then stitched together using software.

It creates a seamless representation that highlights even the finest engravings in the mud, said Stephen Alvarez, a founder of the Ancient Art Archive and a co-author of the study. He was responsible for the 3-D work in the 19th Unnamed Cave.

“It is like magic,” Mr. Alvarez said. “Here is this thing that has been invisible for 1,000-plus years that has suddenly come to life. Even though the people were removed, their stories are still here.”

Dr. Jan Simek, an archaeologist with the University of Tennessee and a co-author of the paper, says there are figures with human features, a coiled snake with a tail rattle and forked tongue and a 10-foot-long serpent winding its way across the expanse.

In some cases, the artists used natural cave features, like fissures, to make serpents appear to be coming out of the wall of the cave. Ghostly humanoid figures are adorned in regalia.

Charred fragments of river cane suggest the artwork, finely incised in a veneer of mud, could have been a team effort, with someone holding a torch while the artist, or artists, worked, reports AOL.com.

Some of the figures are over seven-foot-long, and seem to show people wearing Native American regalia, such as headdresses, and carrying what appear to be rattles. “They are either people dressed in regalia to look like spirits, or they are spirits,” said Simek.

And if they were people dressed as spirits, they were for a time considered the spirits themselves. “The term we like to use is that they were ‘materializing’ those spirits through the costumes that they wore,” Simek said.

Since cave art was first documented in North America in 1979, Dr. Simek and Mr. Alan Cressler, who now works for the United States Geological Survey, have been studying what is known as dark-zone cave art, which involves exploring passageways unreachable by natural light.

Talking about the extent of the artwork in the cave, Dr. Simek says, “It is highly detailed, It covers an acre of surface area on the ceiling. The glyphs are in a single chamber, but the cave goes on.”

The new study comprises more than 14,000 photographs, yet it covers only a small part of the ceiling, Alvarez said. Many more are likely to be found.

And without the use of photogrammetry and other advanced photographic techniques, the carvings in the dark zones might have been overlooked.

“Photogrammetry is one of the best methods to document and reveal new data, especially for rock art images often barely visible or not visible by the naked eye,” said Radek Palonka, a professor of archaeology at Jagiellonian University in Poland.