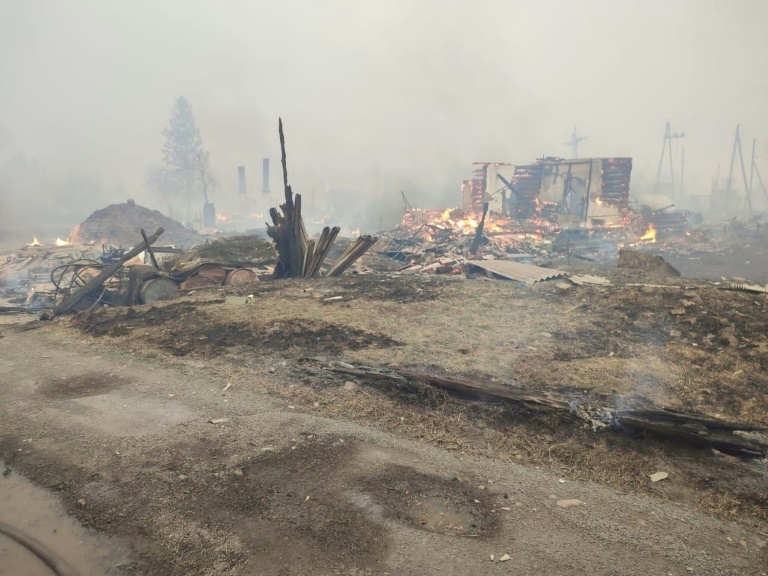 The town of Zaozyorny was hit by fires in Russia’s Krasnoyarsk region, in which at least five people lost their lives – Copyright AFP NELSON ALMEIDA

Fires that have broken out across southwestern Siberia have killed at least 10 people and damaged hundreds of buildings, local authorities said on Saturday.

Hundreds of firefighters are trying to contain the blazes, which are a rare occurrence in the region during May and have been fuelled by lack of rain and fierce winds, they said.

In the Krasnoyarsk region, at least five people lost their lives in the fires, which damaged around 450 homes, the local authorities said, declaring a state of emergency.

In the Kemerovo region, three people were found dead in a burnt home.

“Extinguishing (the fires) is being complicated by meteorological conditions — violent winds are fanning the flames and preventing them from being put out,” the regional ministry for emergencies in Krasnoyarsk said on Telegram.

Regional governor Alexander Uss said gales of up to 40 metres per second had brought down trees and power lines across large swathes of the Krasnoyarsk region, sparking the fires which authorities said 300 firemen backed by 90 vehicles were fighting.

“We have called for help from neighbouring territories but are aware that will in the best case not arrive for some hours,” said Uss, adding temporary shelters were being opened for people in the worst-hit areas.

“I have given the order to cut off electricity in part of the region — save for survival facilities, service stations and water supply systems,” he said.

Roman Vilfand, of Russia’s Hydrometeorological Research Centre, told the TASS news agency that such fires were rare in the month of May.

“But there hasn’t been rain for a long time, there were fires, and then strong wind,” he said.

Forest-rich Siberia has suffered from unprecedented fires for several years.

Last year, they belched 16 million tonnes of carbon into the atmosphere, according to an annual European climate report.