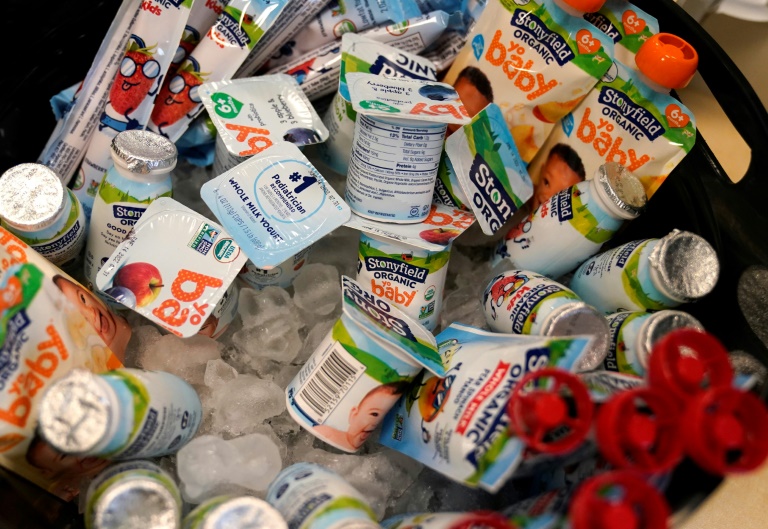 Stonyfield Farm’s organic yogurts for babies have proven popular, and the company aims to build a second assembly line for the product this year – Copyright AFP/File Frederic J. BROWN

French dairy giant Lactalis is betting big on North America, adapting to local preferences to attract consumers while it manages country-specific issues, such as the extreme volatility of US milk prices.

On the new production line at Stonyfield Farm in Londonderry, New Hampshire, a Lactalis subsidiary since 2017, 800,000 yogurts are pumped out every week.

The organic brand is seeing strong demand for its products aimed at babies and children, so Stonyfield plans to build a second production line for them this year.

To nibble at US market share in the yogurt sector, where Lactalis is behind Danone, Chobani and Yoplait, the company has also adopted targeted strategies.

Unlike Europeans, who often eat yogurt at the end of a meal, Americans “have yogurt for breakfast or as a snack,” said Esteve Torrens, Stonyfield’s CEO.

“So the yogurts must be more nutritious, and in larger portions,” he adds, noting that individual cups in the US market generally weigh 170 grams, compared to just 125 grams in France.

The company also is monitoring changes in taste, like the thick, high-protein and low-sugar Icelandic yogurts from the Siggi’s brand, acquired by Lactalis in 2018.

“When I came to the United States as a student, a lot of foods were full of sugar,” founder Siggi Hilmarsson recalls, noting that the best-selling yogurt at the time contained proportionally more sugar than a soda.

He introduced Icelandic skyr to the American market in 2006, but sales really took off in 2012 and 2013 when “sugar replaced fat as public enemy number one in healthy eating,” he said.

He decided to sell his business four years ago to Lactalis in order to promote his yogurt in other countries. The brand is now available in France, Australia, Canada and South Korea.

With Siggi’s and Stonyfield, as well the natural, specialty and organic cheeses acquired from Kraft in 2021, and the labne and other dairy products from Karoun integrated into its portfolio in 2017, the United States will become Lactalis’ largest market this year after France.

It is just ahead of Canada where the group, with an annual turnover of 22 billion euros, has grown in recent years, especially after buying Ultima Foods.

The firm relies on its experience in the sector and its global reach to relaunch products whose financial performance no longer satisfied their former owners, and to expand some promising brands.

Most of the new machines installed at the Stonyfield production site come from Europe “because we have historical relations with our suppliers and they know what we need,” production manager Mathieu Le Duey told reporters during a tour of the plant.

A private company founded in Laval, France in 1933 and still controlled by the Besnier family, Lactalis first entered the North American market when it opened an import-export office in the early 1980s to introduce French products.

The group has expanded through various acquisitions and now has 30 sites and 7,400 employees in Canada and the United States.

More recently it has had to grapple with issues particular to the American market, including labor shortages and volatile dairy prices, which are based on trading on the Chicago exchange.

“We have very high turnover rates in our factories,” sometimes forcing the temporary suspension of production lines, he adds.

At the Stonyfield factory, the group “had to bring in executives for a day because we couldn’t put the products in the boxes.”