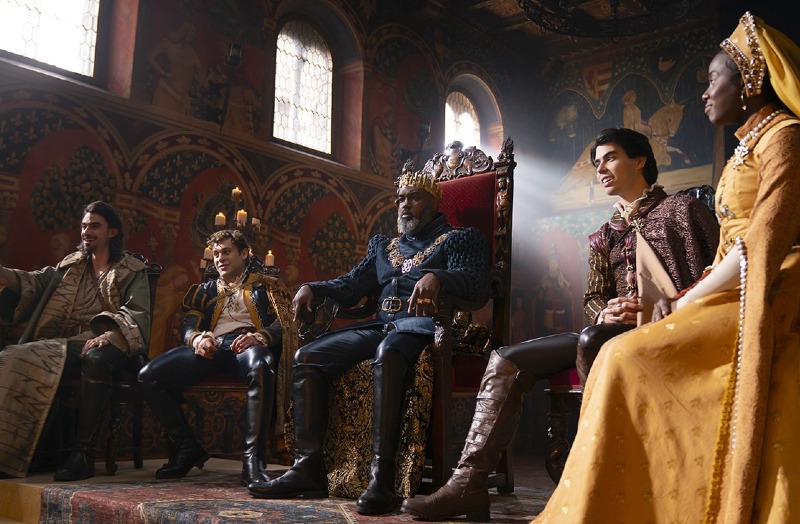 British actor Elliott Ross chatted about being a part of the new Disney+ series “The Quest,” which will be released on May 11.

Ross stars as Prince Cederic in the highly-anticipated (and truly unique) Disney+ series “The Quest,” which is based on the popular 2014 ABC series of the same name.

Brought to the screen by the Academy Award- and Emmy-winning teams behind “The Amazing Race” and “The Lord of the Rings,” “The Quest” is a ground-breaking, immersive, hybrid competition series that drops eight real-life teenagers (Paladins) into the fantastic, fictional world of Everealm, where they must save a Kingdom by fulfilling an ancient prophecy.

Throughout the eight-episode series, these heroes are immersed in a fantasy world that comes to life complete with a castle, royals, ethereal Fates, all forms of mystical creatures, and a Sorceress intent on destruction and power.

On being a part of “The Quest,” he said, “It was super fun. And actually quite overwhelming at times. I was living my dream! They don’t prepare you for how that is going to feel.”

“We lived in this immersive fantasy world and I was a Prince. I mean, how cool is that? ‘The Lord of the Rings’ trilogy is some of my favorite movies, so getting to be a lead in a big fantasy show like this, where I was literally working with the same producers, was wild for me. And I cared so much about the work. I was given so much space to be creative and they trusted me to do my thing, which was incredibly satisfying,” he elaborated.

He opened up about playing Prince Cederic in “The Quest.” “Cederic has an incredible character arc and I really enjoyed investing in that. For me, it is a journey of masculinity – a process of progressing from boy to man, and what that actually means,” he said.

“Cederic is at a developmental point in his life and that is an exciting challenge for an actor. One of the producers told me that this role found me at the right time in my own life, and I believe that,” he added.

“I just turned 30 and although Cederic is younger than that, I could relate to the transitional life stage. He faces his immaturities and shakes off his old views of the world, learning to open his heart and his mind to fresh ideas. He is grieving his father and also his identity, which is changing. The journey into the self is something that I found really engaging and relevant for me,” he explained.

On his daily motivations as an actor, he said, “To be honest, I try to stay motivated in my life in general, rather than just as an actor. The acting work is out of my control. I get sent auditions and I work really hard and sometimes I book the job… that’s just how it goes and I roll with the punches.”

“I have found that my acting work is best when there is as much balance in my life as possible, so I make a point of trying to achieve that. This comes in the form of fitness, adventure, social life, family life, and general wellbeing! I also do a couple of other jobs that bring me joy and purpose. For instance, I am a personal trainer for private clients, which I absolutely love,” he said.

Ross continued, “I would say this motivates me as an actor because running my own business helps me feel capable and in control. When it comes down to it, those really are the important things for me to feel when approaching a new script. So to answer your question, investing in myself as a person and an entrepreneur are the things that really fuel me as an actor.

On being an artist in the digital age, at a time when streaming services such as Disney+ are so prevalent, he said, “It feels exciting. There are just more opportunities. More projects, more jobs. Doors that were closed for so long are now open to more people. The audience is also much larger now; it’s global!”

Ross continued, “I’ve seen trailers for ‘The Quest’ in Spanish, German, and French, just to name a few. I know that my work will reach corners of the world that I’ve never even been to. That is amazing to me. What’s not to like about that? More to the point, because all auditions have been virtual for the past couple of years you can audition for projects anywhere in the world.”

“Actors no longer really need to be present in a major city to book work,” he said. “This is a game-changer! For example, I booked ‘The Quest’ from my flat in London, doing a callback audition on Zoom with producers in LA. That would have never happened before… I owe a lot to the digital age!”

For young and aspiring actors, he said, “It seems counterintuitive, but don’t focus on the big dreams, it isn’t helpful. Just focus on the next step. What can you do, right now, with the resources available to you, to take your next step forward. This attitude can and should be applied at every stage of your career.”

“First, identify a realistic next step on the ladder for you,” he said. “Then do the work and make the decisions that help take you there. You don’t need an agent to do this and you don’t need to wait for anyone else to give you permission. People will try and tell you what you can and can’t do – they will almost always be wrong.”

Ross continued, “You already know what you can do. So be creative with what is in front of you. If you are doing a fringe theatre show for no money – great! How can you maximize that opportunity? Is there one person you can get to come and see the work that might be able to offer you some mentorship? People who saw my early theatre work ended up becoming incredibly important mentors in my career because they believed in me. Seek mentorship from the right people! And don’t be afraid to ask for help.”

“I would also suggest spending as much time and energy investing in your side hustle as you do in your acting career because that is what you will be doing most of the time. If you can enjoy your life as much as possible outside of acting, it will take the pressure off the auditions when they come in and your sense of self-worth will continue to grow regardless of whether or not you are working as an actor,” he explained.

“It is important that you feel empowered, so do a side hustle that empowers you – take a course in something and run your own freelance business alongside the acting career. It’ll do wonders for your confidence and it’ll help make the whole acting thing financially more realistic in the long term,” he added.

Ross listed Joaquin Phoenix and Hugh Grant as his dream collaboration partners in the acting world. “I would love to work with Joaquin Phoenix. I think he’s an incredible actor and I’d watch him in anything! I guess I wouldn’t say no to a project with Hugh Grant either.. because how fun would that be?” he said.

“Now my ambitions are different for sure but I’m pretty open-minded about what I want for the future. It’s largely out of my control so I just try to live my life by a set of values that I believe will keep me on the right path,” he said.

“Success for me isn’t necessarily career-driven because I place a lot of importance on my wellbeing and my core values as a person.  I want to keep growing, having adventures, healthy relationships, and an exciting career that pays for a good quality of life whilst feeling very calm all of the time. How hard can that be?” he elaborated.

Ross stated about “The Quest,” “The most important thing for me is that they just have fun with it! It honestly is such a cool concept and it’s just there to be enjoyed. We put ordinary teenagers into an epic fantasy world and we watch them navigate that experience.”

“It is charming, authentic, funny, scary, heart-warming, and emotional all at the same time. The production value is incredible – it is spectacular in every sense of the word and every department has absolutely smashed it. Costumes, set design, hair, and makeup are all amazing. So just enjoy it. It’s a blast,” he concluded.