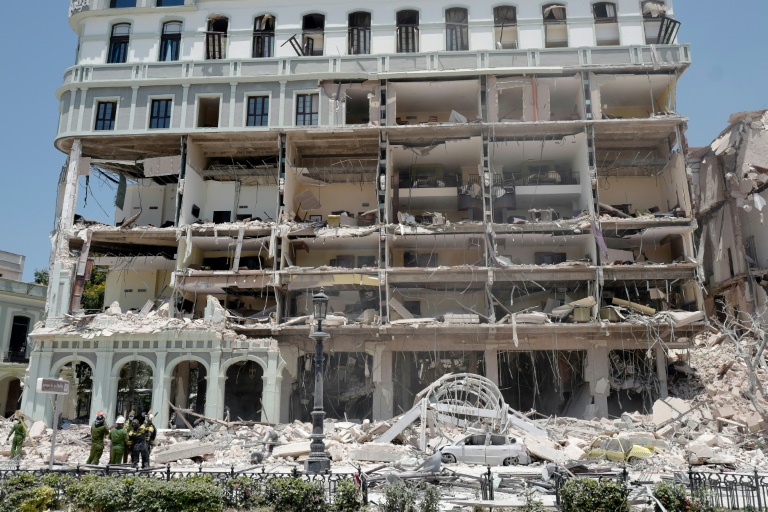 Eight people were killed and about 30 hurt in a powerful explosion, likely caused by a gas leak, that ripped through a five-star hotel in central Havana on Friday, the Cuban government said.

Rescuers combed through the rubble looking for survivers after the late-morning explosion sent a cloud of dust and smoke billowing from the prestigious Saratoga Hotel.

The first four floors of the establishment, which was empty of guests while being renovated, were gutted.

“Search and rescue work continues in the hotel, where it is possible that other people are trapped,” Havana Communist Party official Luis Antonio Torres Iribar said, adding 13 people were reported missing.

The blast tore off large parts of the facade, blew out windows, and destroyed cars parked outside the hotel, which is known for having hosted celebrities such as Madonna, Beyonce, Mick Jagger and Rihanna.

“So far, eight people have died and about 30 are hospitalized,” the Cuban presidency tweeted.

Eleven were “in an extremely serious condition,” said Miguel Garcia, director of the Calixto Garcia hospital treating the wounded.

Inside the hotel at the time were employees preparing for its post-refurbishment reopening, scheduled for next Tuesday.

A cook had smelled gas and found a crack in a pipe shortly before the blast happened.

“It was neither a bomb nor an attack, it was an unfortunate accident,” said President Miguel Diaz-Canel, who arrived at the scene shortly after the explosion accompanied by the prime minister and National Assembly president, and then visited the wounded in hospital.

Cuba was hit by a wave of anti-communist bombing attacks on hotels in 1997, in which an Italian tourist was killed and six people injured.

Ambulances and fire trucks rushed to the scene and police cordoned off the area, dispersing people who swarmed to the hotel near Havana’s emblematic National Capitol Building that housed Congress prior to the Cuban revolution.

It is also next to a school, but no pupils were injured, according to the presidency.

“We felt a huge explosion and (saw) a cloud of dust… many people ran out,” Rogelio Garcia, a bicycle taxi driver who was passing outside the hotel, said.

“There was a terrible explosion and everything collapsed,” said a woman, her face covered in dust, who declined to give her name.

According to the website of the Saratoga Hotel, it is an upmarket establishment with 96 rooms, two bars, two restaurants, a spa and gym.

“Our solidarity to the victims and affected, as well as to the people of that dear brotherly people,” the minister tweeted.