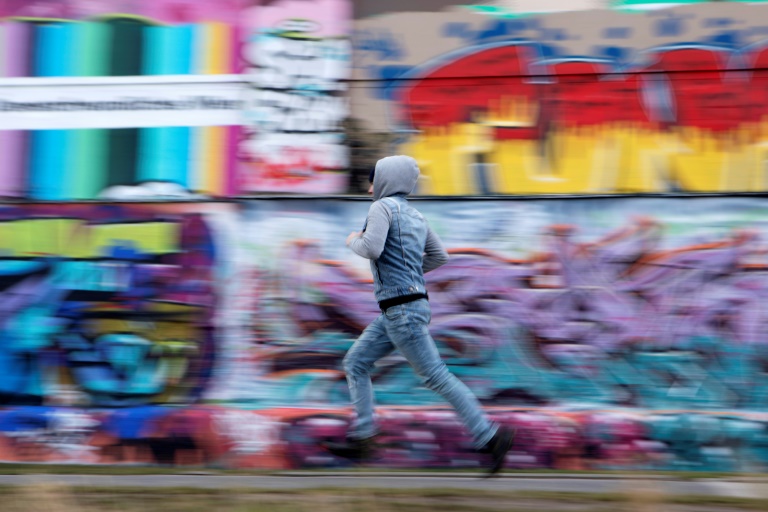 Never safe: A young Chechen exile runs past a wall near the Danube Canal in Vienna – Copyright AFP ALEX HALADA

Twenty years after Vladimir Putin flattened their capital Grozny in the same way that his forces are now destroying Mariupol, Chechens refugees in Europe still live in fear of Russia’s long arm.

Tens of thousands fled the small Muslim-majority republic in the North Caucasus in the aftermath of two bloody wars with Moscow, the last launched by Putin in 1999 to bring the breakaway region to heel.

The Russian leader later installed Ramzan Kadyrov as Chechnya’s strongman. He has since ruthlessly suppressed all opposition, and never tires of declaring his ferocious loyalty to Putin.

Austria has one of Europe’s biggest Chechen communities. Many of the 35,000 exiles live in nondescript post-war blocks in a working class district of northeastern Vienna. The men tend to work as security guards while women bring up the children.

But many on these streets dotted with Chechen grocery shops and wedding boutiques live in dread.

Dozens told AFP of the constant menace of being targeted by Kadyrov’s notorious henchmen, the “Kadyrovtsy”, who have been accused of hunting down his opponents abroad.

Others are afraid of being sent back to be tortured and killed — a fear that is far from unfounded according to human rights groups.

Before the war in Ukraine, extraditions of Chechens from Europe to Russia were being speeded up after the terror attack on the Boston Marathon and the gruesome murder of a French teacher by a young exile.

Despite the conflict, there are no signs the deportations will stop.

Moscow’s arm reached Zorbek Nazuev, a grandfather with a long grey beard who has lived in Austria for 18 years, last February.

He had fled there with his children after the second conflict fearing retribution for fighting with the “boeviki”, the Chechen rebels who defeated the Russians during the first war between 1994 and 1996, when Chechnya briefly won its independence.

He had heard nothing from Moscow since he left until a letter from the Austrian prosecutor’s office arrived accusing him of terrorism and murder.

According to a document seen by AFP, prosecutors claim to have intelligence that he took part in a massacre of Russian civilians in 1995.

Nazuev denies that he “killed innocent people”, insisting that he and other Chechen fighters were only “defending ourselves from the Russian invader”.

“They are rewriting history,” said the thickset man in his 50s, whose name has been changed to protect him.

Nazuev wonders if the charges and possible extradition he is facing could be linked to the fact that one of his relations fought in Syria with the Islamic State group.

The Austrian authorities refused to discuss the case despite numerous attempts by AFP through police and judicial sources.

Hundreds of Chechens have been expelled from the European Union since it signed a 2006 agreement with Russia to ease the return of convicted suspects or those subject to an Interpol red notice.

No official statistics on the extraditions exist, but the Council of Europe denounced the abuse of the Interpol system by some countries to “persecute political opponents abroad” in a 2017 report.

Exiles also believe European countries have toughened their line against them because of terror fears after Chechens were involved in a number of jihadist attacks.

Indeed, after the killing of French teacher Samuel Paty by a Chechen refugee in October 2020, Austria created a special force to tackle extremism and “parallel societies” within its Chechen community.

A month after Paty’s murder, Vienna suffered its first ever Islamist attack when four people were killed by a man said to be jihadist sympathiser, with authorities lambasted for surveillance failures in the run-up to the attack.

Just over a year later in December 2021, Austria chartered a flight to deport 10 people to Russia, boasting of its “efficient cooperation” with Moscow.

Despite commercial flights with Russia being cut by sanctions over the war in Ukraine, the expulsions are still live, according to the Austrian interior ministry.

“I’d rather kill myself here than go back,” said Nazuev, who claimed he was left handicapped after he was tortured with electric shocks before he fled Chechyna.

Moscow has continually assured European governments that Chechen exiles sent back to Russia will be fairly treated.

However, several have been killed or disappeared, while others have been tortured or convicted on charges that human rights group say were “fabricated”.

Last month the Russian rights group Memorial — which has since been banned by Moscow — criticised France for turning a blind eye to the death of 20-year-old Daud Muradov, who was sent back to Russia in December 2020 after being deemed a security risk.

At the end of last year he was transferred to Grozny where he was tortured, they said.

His relatives were told in February that he was dead. They have not been given his body nor the results of a post-mortem, Memorial added.

But even more than extradition, Chechen exiles fear the assassins that Kadyrov sends to liquidate his opponents in exile.

The Austrian courts singled out the Chechen leader for being involved in the killing of one of his opponents who was shot in Vienna in 2009 after criticising Kadyrov’s human rights record.

The victim’s lawyer, Nadia Lorenz, told AFP that the case “still stops me sleeping”, claiming that “correspondence between the Austrian courts and Grozny” allowed the killers to pinpoint where her client lived.

A few days before he was shot, father-of-four Umar Israylov had been refused police protection despite being followed in the street.

The case threw the spotlight on how Kadyrov’s killers work, with prosecutors convinced he gave the order for Israylov’s assassination.

According to Israylov’s widow, the Chechen leader called her husband twice before he was shot, demanding he return to Russia immediately.

But Kadyrov’s role was never fully aired because Moscow ignored Vienna’s calls for help with the investigation.

Chechen activist Rosa Dunaeva insists the “Kadyrovtsy” were responsible for another hit in Vienna in July 2020 as well as similar killings in Lille, France, earlier that year and in Istanbul in 2011.

“The media give the impression that we are involved in crime and religious extremism, when the vast majority of Chechens are living in fear and don’t want anything to do with politics anymore,” said Dunaeva at one of the regular protests against the deportations.

Indeed many Chechens are well integrated in Austria, like judo champion Shamil Borchashvili, who won a bronze medal at the Tokyo Olympics last year.

Or Zelimkhan Kazan. The 19-year-old — whose name we have changed for his safety — was born in Austria and has never been to Chechnya. He is studying programming and has already set up two start-ups.

“I work and have everything I need but I don’t feel 100 percent safe,” said the mixed martial arts (MMA) fan as he worked out by the Danube Canal.

“There is no way I could get away with the things an Austrian teenager might do — for me it would be a death sentence,” he insisted, meaning deportation to Russia.

Kazan, who has no Russian papers, but only leave to stay in Austria, cannot be naturalised in the country he was born in because of Vienna’s strict nationality laws.

Which can make life difficult when Kazan says plainclothes police stop him “three or four times a month” to check his papers.

“Some call me a faggot, hoping that I will react violently,” he added.

All the Chechen refugees AFP talked to said they felt targeted by the police, with the slightest clash leading to a conviction that could see them being deported.

Last July Austrian police officers were found guilty of beating a Chechen after being caught on security cameras.

Kazan also has to run the gauntlet of the “Kadyrovtsy”, who stand out because of their big cars and their swagger. When he sees them, he pulls down his hood so they don’t ask him any questions.

Activist Dunaeva is as worried about the growing grip Ramzan Kadyrov — who has a vast social media following — has on young Chechens born in Europe. “When he is not killing them, he brainwashes them and tries to turn them against the West,” she said.

Chechens also talk about cocaine dealing that is destroying the lives of young men who see no future and are easy prey for Mafia clans. And women complain of having their freedom curtailed by their “big brothers”.

Angered by the discrimination they face in Austria, some fall into the charismatic Kadyrov’s trap, and are easy fodder for his macho posturing on social media, dividing families who had fled his grip.

“The regime also promises good career prospects for young Chechens educated in Europe who return” to their homeland, French expert Le Huerou said. “The anti-gay propaganda which celebrates masculinity can also be attractive” for some Chechens steeped in the country’s martial mythology.

A contingent of one thousand Chechens were reportedly sent by Kadyrov to fight for Moscow in Ukraine. But other Chechens are also fighting alongside the Ukrainians, several sources told AFP.

And among the millions of refugees fleeing the fighting, a young Chechen woman travelling with her son was arrested in Romania. Courts there have already ordered her extradition, accusing her of “being part of an armed group opposed to the Russian Federation”. Her appeal has now been rejected.

Russia may have started a new war, but its hunt of Chechens continues unabated.