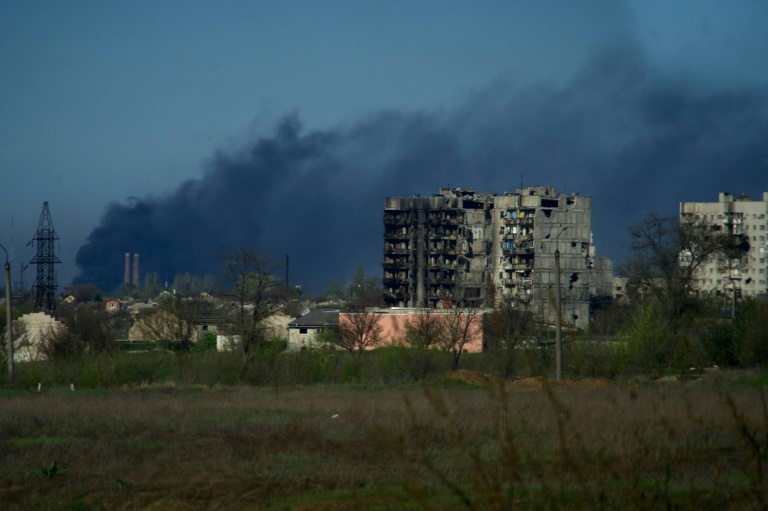 Smoke rises from the grounds of the Azovstal steel plant in Mariupol, site of a planned three-day ceasefire that will begin Thursday – Copyright AFP Isaac LAWRENCE

A Russian-announced ceasefire was due to begin Thursday at the besieged steel plant in the devastated Ukrainian city of Mariupol, to allow civilians to flee even as its defenders vowed to fight to the end.

The three-day halt in Russia’s attack on the Azovstal steelworks was announced as EU member states debated a proposed ban on Russian oil, the bloc’s toughest move yet over Moscow’s invasion of its neighbour.

The EU also pledged to “significantly increase” support for Ukrainian neighbour Moldova, where a series of attacks in a Russia-backed separatist region has sparked fears a war that has killed thousands could spread more than two months after it began.

European Commission chief Ursula von der Leyen on Wednesday said the bloc would “phase out Russian supply of crude oil within six months and refined products by the end of the year”, a move that would still not touch its huge gas exports.

But within hours, Hungary — whose populist leader Viktor Orban is one of Russian President Vladimir Putin’s few EU partners — said it could not support the plan “in this form”, as it would “completely destroy” the security of its energy supply.

Ukrainian Foreign Minister Dmytro Kuleba hit back that EU countries blocking an oil embargo would be “complicit” in Russia’s crimes in Ukraine.

Ukraine’s allies have sent money and, increasingly, heavy weapons to Kyiv to help it defend itself in a war US President Joe Biden has framed as a historic battle for democracy.

Biden said Wednesday he was “open” to imposing more sanctions on Russia and would be discussing measures with allies from the Group of Seven democracies in the coming days.

But despite severe blows to its economy and the thwarting of its early war goals, Russia continues to steadily pound away at Ukraine’s embattled eastern defences.

After failing to capture Kyiv, Russia’s military campaign is now focused on uniting separatist pro-Russian areas in the east with Crimea, which Moscow seized in 2014.

The strategic southern port of Mariupol has become an emblem of the suffering of the war, with an untold number of dead and basic supplies cut off as Moscow carried out a scorched-earth campaign to wrest control.

The last Ukrainian soldiers are holding out at the Azovstal steelworks, where Mariupol Mayor Vadym Boichenko said there was heavy fighting Wednesday.

Russia was attacking with heavy artillery, tanks, planes and ships off the coast, he told Ukrainian television.

“There are local residents there, civilians — hundreds of them there,” he added. “There are children waiting for rescue. There are more than 30 kids.”

“The Russian armed forces will open a humanitarian corridor from 08:00 to 18:00 Moscow time (0500 to 1500 GMT) on May 5, 6 and 7 from the site of the Azovstal metallurgical plant to evacuate civilians,” the ministry said.

“The situation is extremely hard. However, we will continue carrying out the order to keep up our defences no matter what,” he said in a video.

“In the current conditions, we cannot use special equipment to clear the debris. Everything is done manually.”

Ukraine’s military intelligence has accused Russia of planning to hold a parade in Mariupol on May 9 to celebrate victory over the Nazis in World War II.

But Russian Defence Minister Sergei Shoigu made no mention of a celebratory march in the city in a briefing on the army’s plan for May 9.

As the focus of Russia’s invasion has moved to Ukraine’s east, there is a steady build-up of tension, with lower-intensity but explosive strikes in some areas and increased fighting in others.

In a no-man’s-land near the southeastern town of Pokrovska, the two sides are only a few kilometres apart — so close that Ukrainian troops with binoculars can see the Russians digging at their positions.

The deep thump of artillery exchanges comes on top of the odd rocket salvo, yet Ukrainian soldiers told AFP during a visit Wednesday that there was almost no face-to-face fighting.

“As for now, they never come on foot, only artillery,” said soldier Dmytro Sirenko, 40, as he peered in the Russians’ direction across a broad, green expanse of farms, fields and the occasional house.

“We have time to entrench ourselves, hide and wait for the possible advance of the enemy,” he said, a rifle in one hand as he stood in a recently dug foxhole.

Both sides on Wednesday reported Russian strikes on infrastructure around the western city of Lviv, near Poland, and Transcarpathia, a region bordering Hungary.

Russia’s defence ministry said that its air and sea-based weapons had destroyed six electrical substations near railways including around Lviv, near Odessa to the south and near Dnipropetrovsk to the southeast.

It said Ukrainian troops in the eastern Donbas region had used the railway stations to transport weapons and ammunition from the West.

In Ukraine’s western neighbour Moldova, there are fears the conflict will spill over the border.

Ukraine has accused Russia of wanting to destabilise Moldova’s separatist region of Transnistria to create a pretext for a military intervention.

Moscow on Wednesday said its forces had practised simulated nuclear-capable missile strikes in the Baltic Sea enclave of Kaliningrad, located between EU and NATO member states Poland and Lithuania.

The announcement came on the 70th day of Russia’s invasion of Ukraine, which has displaced more than 13 million people in the worst refugee crisis in Europe since World War II.

Russian President Putin has made thinly veiled threats hinting at a willingness to deploy tactical nuclear weapons since the invasion of Ukraine and warned of a “lightning-fast” retaliation should the West intervene directly.