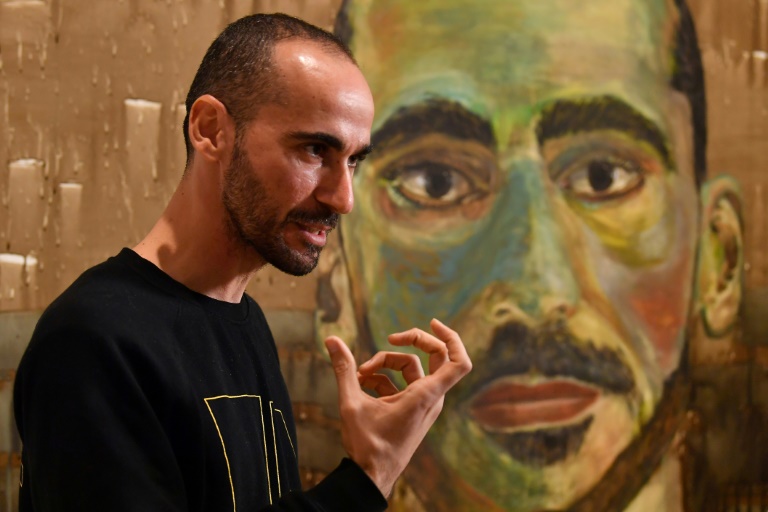 A refugee held for eight years in Australia’s hardline immigration system earned a finalist spot in the nation’s top art prize on Thursday — for a self-portrait he painted with a toothbrush.

For artist Mostafa Azimitabar, a Kurd who fled persecution in Iran, the honour came just over a year after he was released from one of Australia’s notorious immigration hotels.

He told AFP a finalist berth for the Archibald — a portrait prize worth AUD$100,000 ($72,192), which has been awarded to some of Australia’s most esteemed artists — was “one of the best moments of my life”.

Azimitabar’s self-portrait was painted using a toothbrush, a technique he began experimenting with in 2014, soon after being put into one of Australia’s offshore immigration detention camps on Manus Island, Papua New Guinea.

“I asked one of the officers on Manus: ‘Can I have some paint?’… I would like to do some artwork because I don’t want to give up’,” he recalled.

After the officer said he might eat the paint to inflict self-harm, a frustrated Azimitabar returned to the room he shared with dozens of men.

On a table, he spotted a cup of coffee and a toothbrush.

“I don’t know what happened… that moment was so special for me. I grabbed the toothbrush and I put it in the coffee and I just dragged it (on some paper),” he said, describing this as his “moment of victory”.

Azimitabar’s self-portrait is entitled “KNS088”, the government identification number he was given during his eight years in detention.

He said painting was a reminder that he was a person, not a number.

“Art and painting helped me to be strong, to continue. Because when I paint, I don’t feel any trauma,” he said.

The UNHCR has repeatedly called on Australia to close its offshore camps, saying they “undermined the rights of those seeking safety and protection and significantly harmed their physical and mental health”.

But when he was moved to Australia’s mainland for medical care and placed in a detention hotel, Azimitabar found it difficult to make art.

Australia’s detention hotels, which made global headlines earlier this year when tennis star Novak Djokovic was held in one during his visa stoush, were “worse than Manus”, he said.

Then, on January 21, 2021, with little warning or explanation, he was released.

Azimitabar was given a six-month bridging visa, which allowed him to work, but not study, access welfare or claim support for accommodation.

Since his release into the community, he has tried to build a life in Australia, working at a charity called ReLove.

“We provide free furniture to people (fleeing) domestic violence, or people who have been through a lot of trauma,” he said.

He has also painted, a lot, but found traditional tools didn’t inspire him as much as the toothbrush.

“This toothbrush is a very good friend of mine,” he said.

Azimitabar wanted his self-portrait to capture the “suffering, sadness and strength” of life as a refugee.

He hoped that being named as an Archibald finalist will allow more Australians to understand that refugees are capable of anything.

“I believe that people look at me as a survivor,” he said.

The winner of this year’s Archibald Prize will be announced on May 13.