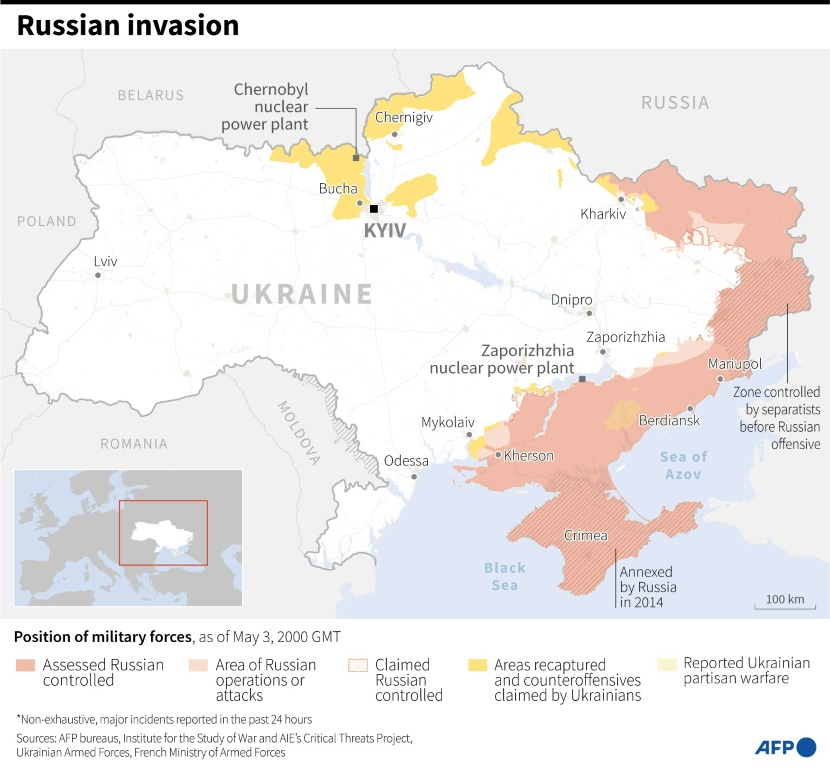 Graphic showing the advance of Russian troops in Ukraine as of May 3. — © AFP

It’s hard to think of a worse military situation than Russia’s in Ukraine being able to “deteriorate”. After all, how much worse than total failure can it get? Yet, it’s now about to sink completely.

Strikes inside Russia, reported but unconfirmed, seem to be increasing. One source reports as many as 15 new strikes in the last week or so.  These strikes may have been by helicopters, drones, or assault forces inside Russia. Some incidents were reported by Russian sources, but not attributed to Ukrainian attacks.

The questions about these attacks are mounting:

The myth of “impermeable” Russian air space is looking decidedly queasy right now. Helicopters shouldn’t have been able to even approach Russian airspace. Large important facilities should have some sort of defense, surely.

These incidents are likely to increase as Russia goes progressively on the defensive. Russia can’t afford to have its rather unreliable logistics under any more strain than it already is. Logistics failed dismally at the start of the war, and don’t seem to be doing more than sometimes achieving a rough average performance. Strikes on resources, ammo, and infrastructure will make things pretty impossible for the Russians.

Ukraine is already turning into one of the greatest military defeats in Russian history. That’s not easy to do. In the process, it’s managed to destroy the credibility of the Russian military very efficiently.

Russia’s eastern offensive has failed as completely as its northern offensive, but with much less fanfare. Ukrainian forces are under pressure, but doing well against large numbers of Russian tanks and almost saturation artillery fire.

Even allowing for Russia’s grotesque tactical failures, a complete misuse of armor, and to put it politely maniacal objective planning, this situation is already bad enough. The entire history of this campaign has been a tale of cluelessness.

Allow me to demythologize a few things first:

“Fire superiority” isn’t a theoretical term. It relates to how much accurate fire you can deliver. The Western artillery, even the towed artillery, is quite mobile, with much better fire control, and a range advantage for effective fire over many Russian guns. The US is also supplying M142 HIMARS rockets, which can hit targets at a range of 310 miles for precision-guided ordnance.

You can see where this is going. The massive Russian artillery superiority is about to disappear. The Russians can’t outshoot this type of countermeasure, and they’ll find it difficult to evade. Countering or even finding mobile units makes air counterstrikes far more difficult, and extremely dangerous, given Ukraine’s good air defenses.

…That makes every other Russian unit in Ukraine an easy target for large amounts of modern artillery. The existing invasion forces can be chewed up systematically, and relatively quickly.

All of this gives Russia a very grim choice; they can continue to feed troops and materials into the meat grinder or pull the plug on the whole operation. Victory is impossible for the Russians. Politically, pulling the plug isn’t an option. Militarily, it will become a necessity.

There’s no way around this thankless situation for the Russians. Escalation is sure suicide and the only other option is an unprecedented total defeat. It’s far too late to stop the guns from arriving. They’re already in Ukraine and ready to go to work. These guns won’t suffer from ammo shortages even if the ammo has to catch taxis to get there.

Time to get out, Russia, while there’s still something left to get out.