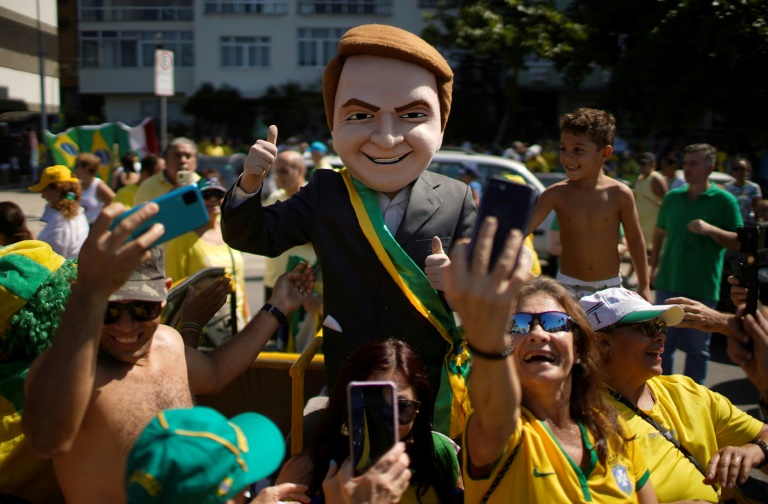 A supporter of Brazilian President Jair Bolsonaro impersonates him during a demonstration to show support for the president May 1, 2022 – Copyright AFP KARIM JAAFAR

A few months back, President Jair Bolsonaro was getting crushed in the polls for Brazil’s October elections, trailing his nemesis, ex-president Luiz Inacio Lula da Silva, so badly it seemed he might lose in the first round.

But the far-right incumbent has staged a turnaround, so much so that political analysts now say he could yet come from behind to win a new four-year term.

The politician dubbed the “Tropical Trump” finished 2021 in bad shape, pummeled in the polls by surging inflation, poverty, unemployment and his chaotic management of Covid-19, which has claimed more than 660,000 lives in Brazil.

A mid-December poll from the Datafolha institute gave leftist Lula, who led Brazil from 2003 to 2010, 48 percent of the vote in the October 2 first-round election, to 22 percent for Bolsonaro.

At that point, the president’s inner circle was alarmed by the extent to which Bolsonaro had failed to grasp the electoral thrashing he appeared to be facing, one political scientist told AFP.

Since then, however, Bolsonaro, 67, has made up remarkable ground against Lula, 76.

He trailed by just five points in a late-April poll from PoderData, for example — 36 percent to 41 percent for Lula.

Part of it is thanks to the fact anti-corruption crusader and ex-judge Sergio Moro withdrew from the race in March, said political scientist Geraldo Monteiro of Rio de Janeiro State University.

“That left Moro’s voters (largely on the center-right) little choice but to go with the candidate they identified most with ideologically,” Monteiro told AFP.

Then, he added, there is the incumbent’s “highly competent knack for keeping Brazil polarized… galvanizing his base with constant battles.”

Bolsonaro has also managed to win support among two key groups, said Lucio Renno, a political scientist at the University of Brasilia: the poor, “by expanding social programs,” and the anti-Workers’ Party (PT) vote — those determined not to let Lula’s party return to power.

The president has been criss-crossing the country, inaugurating public-works projects, playing to cheering crowds, wooing voters in the traditionally pro-PT northeast and lavishly spending public funds.

He is regularly photographed leading rowdy motorcycle rallies by hardline supporters or straddling a horse, a la Vladimir Putin, and waving to the crowd.

He and his inner circle also have a hugely powerful weapon in social media.

Congresso em Foco reported last month for example that Bolsonaro’s senator son Flavio had racked up more than 75,000 new followers on Twitter in several days — 62 percent of them bots.

Lula, meanwhile, does not have a cell phone.

He has less than five million social media followers. Bolsonaro has 20 million.

“As far as the people are concerned, Bolsonaro has already won!” gushed supporter Luciana Ribeiro, 47, at a pro-Bolsonaro rally in Rio de Janeiro Sunday.

But not so fast.

A Brazilian president seeking reelection has never had a disapproval rating as high as Bolsonaro’s — around 50 percent.

“I give him a 35-percent chance of being reelected,” political scientists Monteiro said, though he added: “We can’t rule out that Bolsonaro will further close the gap with Lula throughout the campaign… or even take the lead.”

Bolsonaro appears to have an unshakeable base of around 20 percent of voters — which “guarantees he will make the runoff” on October 30, said Renno.

“Lula is still the favorite,” but Bolsonaro should not be underestimated, he said.

Costa meanwhile predicted a “highly disputed and possibly violent election,” with the pro-Bolsonaro camp preparing the ground to contest the result if they lose.

How things play out will also depend on Lula. The ex-president has recently made a series of gaffes, with controversial statements on abortion, the middle class and the police.

The charismatic-but-tarnished leftist icon will be seeking his second wind when he officially launches his candidacy Saturday at a rally in Sao Paulo.