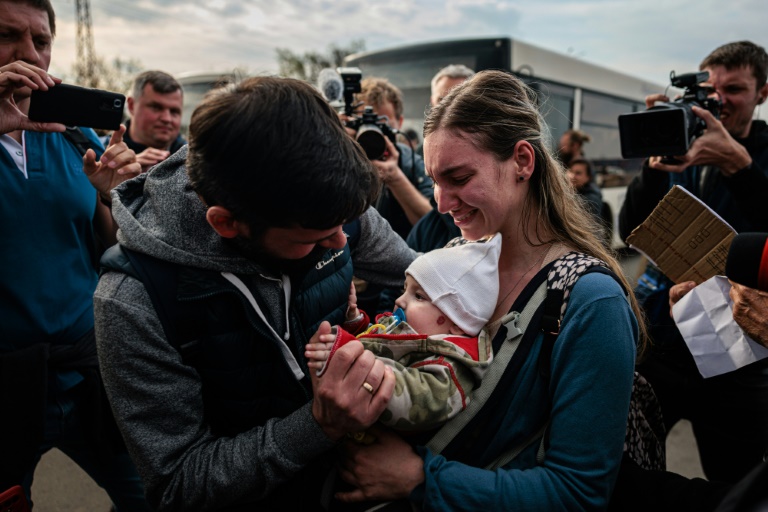 Their bunker couldn’t withstand a direct hit from ferocious Russian bombardment, food was running out and finding water could get them killed — yet that ordeal finally ended Tuesday for Azovstal evacuees in the banal safety of a shopping centre car park.

They had survived in tunnels below the steel works in the devastated city of Mariupol among holdout Ukrainian troops, having to pick bomb-shattered glass from their food and hope someone would finally get them out of there.

It was aboard a caravan of white city buses that they made it to the Ukrainian-held city of Zaporizhzhia, where they were met at a makeshift reception centre by crying loved ones and dozens of journalists.

“Under permanent fire, sleeping on improvised mats, being pounded by the blast waves, running with your son and being knocked to the ground by an explosion — everything was horrible,” evacuee Anna Zaitseva told reporters.

She carried her six-month-old baby in her arms and cried when expressing her gratitude to everyone from the troops who found formula for her child to the urgent international rescue effort that got them to safety.

“Thank you,” she said before being escorted to a private area inside the shopping centre.

A group of some 100 civilians who become trapped in their refuges beneath the steel works were granted passage in an agreement worked out with the invading Russian forces, and which took days to carry out as the world watched.

The fate of civilians, but also the Ukraine troops still there, turned into an international issue and has been the subject of repeated negotiations.

Yet Ukrainian officials noted that some civilians had been left behind during the operation, prompting fresh concerns for their fate after Kyiv announced that Russian forces had launched an offensive with tanks and armoured vehicles at the giant site.

The terror of her refuge at the steel works was fresh for Elyna Tsybulchenko, 54, who used to work at the site doing quality control before the war trapped her there.

“They bombed like every second… everything was shaking. Dogs barked and children screamed,” she said. “But the hardest moment was when we were told our bunker would not survive a direct hit.”

“We understood that it would just be a mass grave and no one could save us under fire,” she added. “It would be impossible to save us.”

She sought shelter there after shelling destroyed her home and water was running short in the city, yet even getting water inside the plant carried immense risks.

“To find water we had move between buildings. The men did that for us, including my dad,” said Zaitseva, the young mother. “He was wounded but thank god it wasn’t fatal.”

She said Ukrainian troops located formula for her infant son, and when that ran out, they came up with semolina that she cooked over candles.

“Raising a child is a difficult thing,” she added, noting about 70 people were sheltering in the same place as her. “It’s even harder in a bunker with no light.”

Mariupol is among the most battered cities in Ukraine, and the Azovstal site was the place that Kyiv’s troops have managed to hold out against Russian forces.

The risk to civilians has been repeatedly decried, with accusations that Moscow has done little to protect the city’s people from its explosive strikes.

“We personally tried to evacuate three times. One time everyone went out and shooting started. The truce was broken,” Zaitseva said.

“And, of course, after that, we were very wary. We thought we had been left behind. But in the end, that turned out not to be true.”