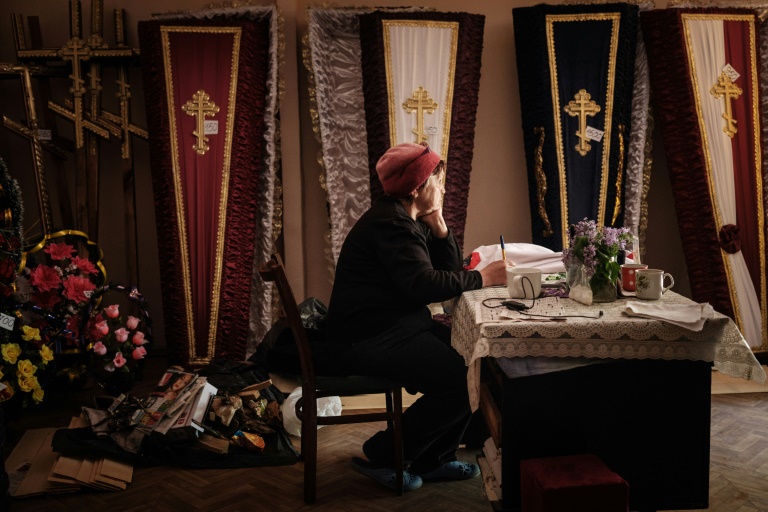 Antonina Boloto sits at a small table decorated with flowers solving a crossword in her funeral supply store, with a view of a building destroyed by Russian shelling in the east Ukrainian town of Severodonetsk.

Several coffins are perched against a wall behind her.

As Moscow’s forces shell Severodonetsk — the easternmost town on the frontline of Russia’s war against Ukraine — Boloto has turned the  shop into a refuge for herself and her relatives.

It is a surreal combination of life and death.

“It’s not a morgue, it’s a just a funeral supply store,” Boloto, 60, told AFP on Tuesday, adding that the facility has a cellar where people can shelter in case of bombing.

“We are just hiding here.”

In the store’s sole dimly-lit room, four coffins, adorned with delicate white and red satin with price tags still on them, lean against a wall. They are surrounded by wreaths and wooden crosses.

With the city under bombardment, residents  bury their dead on their own.

Boloto, who keeps warm in a red hat, has no more customers. So her main focus is keeping her improvised home running.

“This is where we store water,” Boloto said, lifting the lid off a giant metal cooking pot placed on the floor and filled to the brim with water.

Next to it lay a stack of firewood, which Boloto stores inside the shop to keep it dry and then uses to cook food on a small handmade grill outside.

If the firewood were to run out, Boloto said she would not hesitate to ask the owner to burn the wooden coffins for warmth and food.

Her family of eight, mostly elderly people, has enough to eat thanks to an NGO that provides them with potatoes, pasta, oil, ham and preserves.

Outside the shop, two elderly women sit on small chairs enjoying the sun: Boloto’s mother Nina, 92, clad in a dressing gown, and her sister-in-law.

Boloto says it was getting too crowded inside and the women kept quarrelling in front of her. Outside, they are free to bicker while remaining close to the cellar in case the neighbourhood is shelled.

In this space dedicated to mourning, which was miraculously spared from bombardment, Boloto says she has made her peace with the idea of dying.

“Whatever will be, will be. You can go somewhere and be run over by a car when crossing the road,” said Boloto, adding she prays every night for the war to end.

“We hope for peace and that we will stay alive and healthy.”